OnePlus today introduced its new flagship device, the OnePlus 5. During the event where the new phone was announced, OnePlus threw some shade at Apple, mocking the removal of the headphone jack in the iPhone 7 and the iPhone 7 Plus.

"On the bottom, you'll notice that we ditched the 3.5mm headphone jack. The elegance of the overall design is instantly heightened. And who needs a headphone jack anyway? That's why Bluetooth exists, right?" deadpanned Diego Heinz, a designer at OnePlus. "Just kidding. Of course the OnePlus 5 has a headphone jack."

Clip courtesy of iPhone Addict
Heinz goes on to pull up a tweet on the subject of headphone jacks, displaying a poll where 88 percent of 8,000 responders said they "like headphone jacks."

Ahead of the launch of the OnePlus 5, there was a lot of discussion on whether OnePlus would follow in Apple's footsteps and remove the headphone jack from the device. There were early design leaks and cases that featured no headphone jack, sparking speculation and leading to the on-stage joke.

This isn't the first time an Apple competitor has mocked the company's design decisions. When Samsung introduced the now-defunct Galaxy Note 7 in August of 2016, Samsung marketing VP Justin Denison made sure to point out the device's headphone jack. "Want to know what else it comes with?" he asked. "An audio jack. I'm just saying." 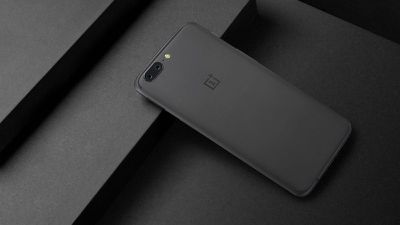 Though the OnePlus 5 still has a headphone jack, the company has adopted many other design elements from Apple, with curved edges, rounded rear antenna bands, a dual camera complete with Portrait Mode, and a "Slate Gray" or "Midnight Black" casing. In fact, The Verge called it "a slightly smaller iPhone 7 Plus that runs Android."

The OnePlus 5, which is priced starting at $479 for 64GB of storage, features a 5.5-inch AMOLED display, a high-end Snapdragon 835 processor, up to 8GB RAM, fast charging, haptic feedback, a 16-megapixel wide-angle camera, a 20-megapixel telephoto camera, and a 16-megapixel front-facing camera.

vertsix
I still find it shocking how similar the rear design is to the iPhone 7.

Yes, I've seen companies have their phone designs inspired by other companies, such as Apple, but this is a nearly identical copy.

I wonder if Apple will do something about it.
Score: 38 Votes (Like | Disagree)

WiseAJ
They are even worse then Samsung at copying Apple
Score: 29 Votes (Like | Disagree)

iLoveDeveloping
Who??? Am I the only one who's never even heard of Oneplus. Is that a phone or a company? Actually that's a rhetorical question - I don't care.
Score: 25 Votes (Like | Disagree)

Nunyabinez
Yes, that was the ONE THING they didn't blatantly copy.
Score: 22 Votes (Like | Disagree)

nwcs
Never heard of them. The problem is it runs Android. I have tried Android over and over and I just don't like it's usability. There are features I wish Apple would copy but the whole of Android is a no buy for me.
Score: 15 Votes (Like | Disagree)
Read All Comments