Daring Fireball has shared the full video of "The Talk Show Live" from Apple's Worldwide Developers Conference this week. 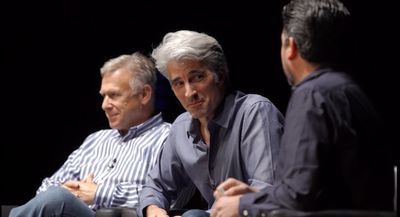 Before a live audience at The California Theatre in San Jose, Apple senior executives Craig Federighi and Phil Schiller joined host John Gruber to reflect on the company's announcements at its WWDC opening keynote on Monday, including several new Macs, macOS High Sierra, iOS 11, and HomePod.

The video, produced by Amy Jane Gruber and Paul Kafasis, is available on Vimeo and embedded below.


MacRumors has put together a WWDC 2017 roundup with the latest news and announcements from the conference.
Tags: Phil Schiller, Craig Federighi
Related Forum: Apple, Inc and Tech Industry
[ 106 comments ]

Did they talk about watch bands?

Such an old and tired, nay, even stone dead, horse. But go ahead and continue beating it. All the Apple haters will continue latching onto and liking the posts.
Score: 21 Votes (Like | Disagree)

Rocketman
Based on this podcast I say give Craig Federighi a fairly large raise and more stock options.
Score: 18 Votes (Like | Disagree)

Based on this podcast I say give Craig Federighi a fairly large raise and more stock options.

imo Craig should just handle the entire keynotes, he was the only one with any life in him up there at WWDC
Score: 18 Votes (Like | Disagree)

adamjackson
I absolutely loved how much they talked about Macintosh both at WWDC & The Talk Show. Enough iPods, iPhones and Watches.
Score: 10 Votes (Like | Disagree)

shk718
this is a great interview - Craig and Phil are superstars - very funny and knowledgeable. They don't give much new info but give some color and a few insider tidbits.
Score: 10 Votes (Like | Disagree)

This same user stole and copied the video ('//www.youtube.com/user/Cuioma/videos?spfreload=10') last year as well. Did they ask John Gruber for permission? Kind of a dick-move to copy someone's video and throw it up on YouTube.
[doublepost=1497026763][/doublepost]

I've been assuming for some time, he'll be the next CEO. He's articulate, energetic, has the right delivery/timing for some of the cornball jokes, he recovers instantly from any flubs (his own, or technical). Look at this background: he worked with Jobs at Next, he's Berkeley educated with an MS/BS in CompSci/EE, he's got real technical chops combined with being a terrific showman.

You listed a ton of amazing and impressive technical qualifications but I don't think Apple needs a technical leader. They need a leader who is good at numbers. Supply chain, customer satisfaction, shareholder dividends, global view of markets and currencies and suppliers, etc. tim is perfectly placed as CEO because he's surrounded by a group of VPs that are highly technical.

Steve's 2nd coming at Apple brought a Jobs that knew he wasn't an expert in these sort of things so he hired Tim, Phil, Jony, Bertrand, and Scott and for the most part, Jobs was big picture about almost every single topic but buck stopped there / first right of refusal for "stupid ideas". He seemed most focused on design than anything else.

Tim was a natural replacement. Jony's role grew, Tim didn't really meddle in the design aspect and everyone rose to more responsibilities.

I don't think Craig, a highly technical person would be the right leader for Apple. Just a gut feeling and very personal opinion.

I hope Craig is in it for the long haul, I just don't know if he's a CEO shoo-in. I'm leaning toward Jeff Williams or Phil Schiller being the guys most likely to be nominated. For the record, I love what Tim has done at Apple and hope he's leading the helm for a very long time and most importantly, has what it takes to step down / retire when the time is right. Nothing worse than a once capable CEO that is now out of their element or too 'semi-retired' to be effective sticking around just because they can. I hope we have Tim at least another 20 years. Being the guy that Steve picked carries a lot of weight with me and how I feel about him.
Score: 9 Votes (Like | Disagree)
Read All Comments