Apple announced a refreshed range of iMacs during its keynote at the Worldwide Developers Conference this week, offering three stock configurations of the new 27-inch model with Kaby Lake processors, Thunderbolt 3 ports, and faster graphics, with optional memory and storage upgrades at purchase.

While Apple offers a 64GB RAM upgrade option for its mid-range 3.5GHz and high-end 3.8GHz 27-inch iMacs, it only offers up to 32GB RAM for the least expensive 3.4GHz base model, which has led some observers to question whether the limit is arbitrarily imposed by Apple or hardware-related. 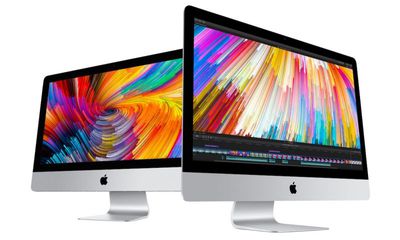 To answer the question, hardware maker OWC tested the low-end 3.4GHz iMac through its MaxRAM Certification program, which determines the maximum amount of memory that can be installed in a Mac as validated by a series of in-house laboratory tests, and found that it does indeed support up to 64GB of RAM, despite Apple not offering the option at sale.

OWC is offering its own 2017 27-inch iMac memory upgrade modules at MacSales.com, including a 64GB Kit (16GB x 4) for $579.99 that users can install themselves. Apple's 5K 27-inch iMacs come with four user-accessible memory slots that support up to 16GB per slot, so Apple customers are advised to select the lowest RAM configuration when buying an iMac if they want to replace the existing modules with the less expensive OWC memory.

OWC notes that while MaxRAM configurations exceed Apple's officially supported maximums, all OWC-brand memory upgrades are "assured to perform flawlessly" and are covered by a Lifetime Advance Replacement Warranty and Money Back Guarantee.

UL2RA
I'm glad they verified this. Apple are some shady shysters.
Score: 14 Votes (Like | Disagree)

Appleaker
Of course the limit wasn't hardware related, that makes no sense.

It's just to Apple can move you onto the next level and charge you higher prices.
Score: 11 Votes (Like | Disagree)

through its MaxRAM Certification program ('https://eshop.macsales.com/memory/maxram'), which determines the maximum amount of memory that can be installed in a Mac as validated by a series of in-house laboratory tests

(Apple probably did this because surely they know even the stupidest person was going to buy buying the lowest spec and then sticking 64gb of ram in it. Even if that wasn't stupid enough, sticking 64gb of ram in at Apple prices when you're trying to save money everywhere else and can buy it yourself is even more dumb. It'd be an insult to customers to offer 64gb at this spec and those prices)
Score: 7 Votes (Like | Disagree)

Can ssd be upgraded too?

It's a huge pain in the butt to do so and you'll void your warranty.
Score: 4 Votes (Like | Disagree)

Apple has always raped users on RAM prices (and SSD upgrade options).
[doublepost=1496914754][/doublepost]I wonder if the iMac Pro will be user upgradable?

The back panel should be removable get easy access to the drives and memory. No need to take the screen out with a toilet plunger. I hope Apple creates this door with the iMac Pro.

A door would also be a easy way to clean the fans from dust that will eventually build up and reduce the cooling of your Mac over time.
Score: 3 Votes (Like | Disagree)
Read All Comments

Sunday February 5, 2023 6:06 am PST by Hartley Charlton
A new version of the Mac Studio with the "M2 Ultra" chip is unlikely to arrive in the near future, according to Bloomberg's Mark Gurman. In the latest edition of his "Power On" newsletter, Gurman explained that since the upcoming Apple silicon Mac Pro is "very similar in functionality to the Mac Studio," Apple may wait until the release of M3- or M4-series chips to update the machine, or...
Read Full Article • 525 comments