iPhone users can finally cross one item off their wishlists: the volume slider no longer covers videos in iOS 11. 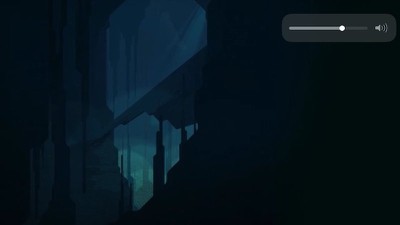 iOS 11 volume HUD screenshot shared by Twitter user Devon T.‏
Now, when a user adjusts the volume while watching a video, a much smaller volume HUD appears in the top-right corner of the screen.

While the change is small, the user interface tweak was highly requested by many iPhone users for several years. On iOS 10 and earlier, the volume HUD intrusively pops up in the center of the screen for a few seconds after the volume is adjusted, unnecessarily covering the video content until it disappears.

iOS 10 volume HUD screenshot shared by Twitter user Justin L.
Some third-party apps such as YouTube already had their own smaller volume HUD, and now the look is universal across iOS 11, as part of Apple's broader improvements to the native video player on iPhone, iPad, and iPod touch.

Apple introduced iOS 11 at its Worldwide Developers Conference on Monday. The first beta was seeded to registered developers later that day, to be followed by a public beta in late June. iOS 11 will be available as a free software update for all compatible iPhone, iPad, and iPod touch models around September.

Cougarcat
It only took them ten years. Now I look forward to an orientation button...in 2027.
Score: 29 Votes (Like | Disagree)

newyorksole
Now make it so that incoming phone calls don't take up the entire screen. How is this still not addressed?
Score: 12 Votes (Like | Disagree)

You will be missed.

macduke
Nice! Surprised nobody noticed until now? Don't let people fool you when they say iOS 11 doesn't change much. All of these small changes add up to a better user experience.

Now if only we could get them to implement the same double tap left/right on a video to skip back/forward 10 seconds that YouTube has. I find myself accidentally trying to do this in the native video controller all the time because it's so useful and intuitive.
Score: 8 Votes (Like | Disagree)
Read All Comments

Wednesday July 8, 2020 9:35 am PDT by Joe Rossignol
Despite multiple reports indicating that Apple will not include EarPods or a wall charger with iPhone 12 models this year, one analyst believes that pricing will still increase slightly compared to the iPhone 11 lineup. In a research note provided to MacRumors, analyst Jeff Pu forecasted that iPhone 12 pricing will start at $749 for a new 5.4-inch model, an increase of $50 over the base...
Read Full Article • 258 comments