Following the conclusion of today's keynote event where Apple introduced new versions of its iOS, macOS, watchOS, and tvOS software, Apple has provided the first beta to developers, kicking off the iOS 11 beta testing period.

Registered developers can download the iOS 11 beta from Apple's Developer Center, or over-the-air once the proper configuration profile has been installed. 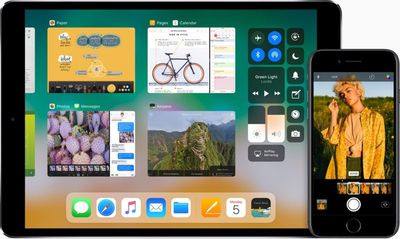 Apple is calling iOS 11 its biggest software release ever for the iPad, thanks to the myriad iPad features it includes, like a new dock that supports improved multitasking, a Files app for better managing files, improved Apple Pencil support, a new App Switcher, and system-wide drag and drop.

iOS 11 also includes many features for both the iPhone and the iPad. There's an incredible ARKit API that's going to let developers build all kinds of new augmented reality apps, and there's also a CoreML machine learning API that's going to allow apps to become a whole lot smarter.

Peer-to-peer Apple Pay payments are being introduced, Messages is gaining a new App Drawer that makes it easier to access apps and stickers, a Do Not Disturb feature that mutes notifications will make it easier for drivers to stay focused on the road, and Siri, Photos, and the Camera app are gaining huge improvements.

The iOS 11 beta is only available for registered developers at this time. As it has done in the past, Apple will provide a public beta for public beta testers later this summer, and the software will see an official release in the fall alongside new iPhones.

and it is finally customizable ;-) Lets see how much..:

"iOS 11 lets you customize the redesigned Control Center so you can change the settings for the things you do most. Want to be ready when inspiration hits? Add a Voice Memos control. Want to dim the lights in the dining room with a tap? Add Home controls. Or use 3D Touch in Control Center to unlock even more commands."

Very disappointed with iOS 11 for iPhone (although it looks better on iPad). Basically the same cumbersome notification system, widgets only on the 1st screen (any new animated ones?) and the same grid/folder layout since the first iPhone. Photos and Maps may be an improved, but now only match what Google has been offering in Android. It may be time to give Android a try.

poorcody
Anyone notice in the screenshots that the signal strength dots have reverted back to the old-style bars?
Score: 18 Votes (Like | Disagree)

jsmith189
Files also comes pre-installed on iPhone, despite it not being mentioned (that I could see).
Score: 10 Votes (Like | Disagree)
Read All Comments

Thursday September 29, 2022 12:38 pm PDT by Juli Clover
Tony Blevins, Apple's vice president of procurement, is set to depart the company after he made a crude comment about his profession in a recent TikTok video, reports Bloomberg. Blevins was in a video by TikTok creator Daniel Mac, who was doing a series on the jobs of people he spotted with expensive cars. After seeing Blevins in an expensive Mercedes-Benz SLR McLaren, Mac asked Blevins what ...
Read Full Article • 742 comments

Friday September 30, 2022 12:51 pm PDT by Juli Clover
Apple CEO Tim Cook has been touring Europe this week, sitting down for interviews with various media publications. Augmented reality has been a running theme in Cook's discussions, and it is a topic he brought up again in an interview with Dutch publication Bright, which is part of RTL News. "I think AR is a profound technology that will affect everything," Cook said, echoing comments from...
Read Full Article • 298 comments

Sunday October 2, 2022 6:41 am PDT by Joe Rossignol
Apple is developing new iPad Pro, Mac, and Apple TV models, and at least some of these products will be released in October, according to Bloomberg's Mark Gurman. However, Gurman continues to believe that Apple is unlikely to hold an event this month. In the latest edition of his Power On newsletter, Gurman said "the big iPhone 14 unveiling last month was probably it for Apple in 2022 in...
Read Full Article • 168 comments

The 2021 Apple TV Siri Remote Almost Had a Finger Rest