Ahead of the 2017 Worldwide Developers Conference, set to kick off on Monday, June 5, Apple has updated its official WWDC app for the event, introducing several new features and a revamped look.

According to Apple's release notes, the updated app features curated video playlists centered on featured themes, interactive venue and street maps, and a new Venue tab that provides information about the conference site in San Jose, California. For the first time in many years, WWDC will take place at the McEnery Convention Center in San Jose rather than the Moscone Center in San Francisco. There are also stickers for Messages featuring classic Apple icons. 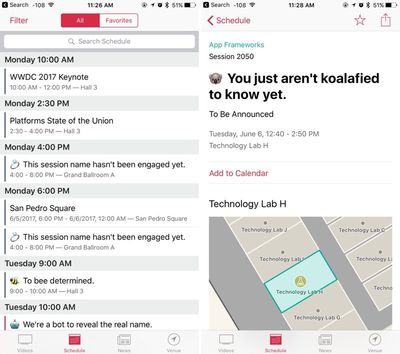 The WWDC app is meant to be used by both conference attendees and developers who were not able to purchase tickets for the event. It offers up on-site tools like maps and start times for labs, sessions, and events, plus it includes live video streams so those not in attendance can watch each session.

As of last year, Apple also offers a tvOS WWDC app for the fourth-generation Apple TV, so developers can watch live sessions on their television sets.

Today's update also includes a schedule of sessions that will take place during the conference, with several funny placeholder names in place to hide information that won't be available until new versions of iOS, macOS, tvOS, and watchOS are unveiled at the keynote event. For the first time, Apple will be allowing podcasters to reserve time for on-site WWDC podcasts in a special Podcast Studio.

The Worldwide Developers Conference starts on June 5 with a keynote that will take place at 10:00 a.m. Apple will live stream the keynote on both its website and on the Apple TV, and MacRumors will also provide live coverage on MacRumors.com and through the MacRumorsLive Twitter account.

Apple's WWDC app can be downloaded from the App Store for free. [Direct Link]

macduke
My body is ready.
Score: 6 Votes (Like | Disagree)

klooney
I have a feeling its going to be another disappointing WWDC but deep down I'm hoping its not.
Score: 5 Votes (Like | Disagree)

So what comes to iPad first: podcasting or Xcode?

Both :). That would be nice. The pieces are in place for a full XCode solution on iPad, with the Work they did in Swift Playgrounds. It's just a matter of fleshing it out fully. While comprehensive podcasting solutions seems like a long overdue capability missing on iPad, that has begun to get a lot of attention inside Apple. The fact that they're having a podcasting room for all the big podcasters attending shows just how much Apple has flipped on podcasting. That's on top of the presumed Apple exec appearance on Grubers podcast again this year.
[doublepost=1496209579][/doublepost]

Can't innovate anymore my ass, and mocking emojis, are pretty tired memes on this forum. They were almost funny maybe the first few times. Now it just sounds like an echo chamber. Trolls need to "innovate my ass" a little more with their mockery attempts.

Apple makes computers not just as tools for creation, but also tools for fun. For "mere mortals." For cultural impact. Who woulda guessed? It's almost like Apple hasn't been doing that very thing for decades now....replace emojis/stickers with iLife, or iChat backgrounds, or MacPaint. Yea, Apple sure has lost track since Steve passed. It was totally a replicant on-stage demoing iChat backgrounds, laughing his ass off at Phil being a goof in iChat.
Score: 4 Votes (Like | Disagree)

ugahairydawgs
Maybe it's just a sign that I'm getting old, but the koalafied thing made me chuckle.
Score: 3 Votes (Like | Disagree)
Read All Comments

Monday May 16, 2022 10:10 am PDT by Juli Clover
Apple today released macOS Monterey 12.4, the fourth major update to the macOS Monterey operating system that launched in October 2021. macOS Monterey 12.4 comes over two months after the launch of macOS Monterey 12.3, an update that added Universal Control. The ‌‌‌‌‌macOS Monterey‌‌ 12.4 update can be downloaded on all eligible Macs using the Software Update section of System...
Read Full Article • 120 comments