Apple has quietly updated its Maps app to include additional 3D coverage of the new Apple Park campus location in Cupertino, California.

The enhanced detail includes a "Map" view with 3D building models as well as access roads running in and out of the campus. Traffic directions, pedestrian walkways, and other information can also be found when searching the area. 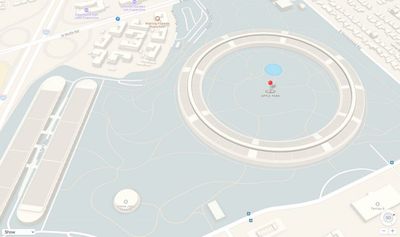 In addition, the company has added some new points of interest for Apple Park, such as the Steve Jobs Theater, the research and development facility, the staff fitness center, and above-ground parking. The manmade pond that lies within the walls of the main building also features.

Apple has gradually been adding Maps location information and satellite imagery for Apple Park since March. The company has already started moving thousands of staff to the new campus while landscaping and exterior work to the central office building continues, as evidenced in recent drone footage.

Apple Park began as an idea by the late former CEO Steve Jobs, who pitched the plans for the campus to the Cupertino City Council in 2011, with a completion date for 2015. Demolition on the proposed site began in 2013, but construction delays pushed back a late 2016 opening to the spring of 2017.

Aluminum213
Now if only Apple maps would actually cover the rest of the country it would be useful
Score: 5 Votes (Like | Disagree)

daanodinot
Whatever you think of Apple Maps, Apple Park coverage has been excellent.
Score: 5 Votes (Like | Disagree)

Stella
Well, ok. I'm sure Apple took extra care to ensure the mapping was accurate down to the last mm!

I still don't trust Apple maps and doesn't cover enough modes of transport and have long since removed the app icon from my phone.
Score: 3 Votes (Like | Disagree)

Futurix
They didn't update the app, they updated the server database with 3D data :rolleyes:
Score: 2 Votes (Like | Disagree)

Considering not a single normal soul will be allowed in the park, they might have just well covered area 51.

That's most certainly not true. There is an Apple Store and a café that are open to the public.

Radial - adj. of or arranged like rays or the radii of a circle; diverging in lines from a common center.
Radian - noun - a unit of angle, equal to an angle at the center of a circle whose arc is equal in length to the radius
I think I was misusing radials as a noun, instead of an adjective.

**EDIT**
Yeah... I never got Radians for engineering. I understand the use, as it is a direct relationship in the circle, but having been a Boy Scout, degrees makes sense for me.
[doublepost=1496144746][/doublepost]
I understand what you mean (overthinking... honey, is that you???), but I happen (at the moment) to work in the world's largest building (by volume), and having an exact place to find people, or conference rooms is critical. If someone says, "I'm in conference room 511P6 in the factory," anyone that has the basic (it's the same across the corporation) understanding can know that it's on the 5th floor (the 5 in 511), in XY coordinate P6.

I was just hoping to have a consistency and commonality between round buildings. This way, when Apple has another round building, the mapping is consistent.

As for the football (American or Worldwide) stadia, those get kind of goofy. I've been in those where there are numbers for the sections, letters, and other variations...

You could used normalised coordinates so each room would have Rho (meters) and Theta (radians) so you can identify any point.
Score: 1 Votes (Like | Disagree)
Read All Comments