Apple Maps has been recently updated with public transit information for those living in and traveling to the Netherlands. Transit directions allow users to navigate the Netherlands thanks to integration with the Intercity direct train line, various bus routes, trams, and ferries. 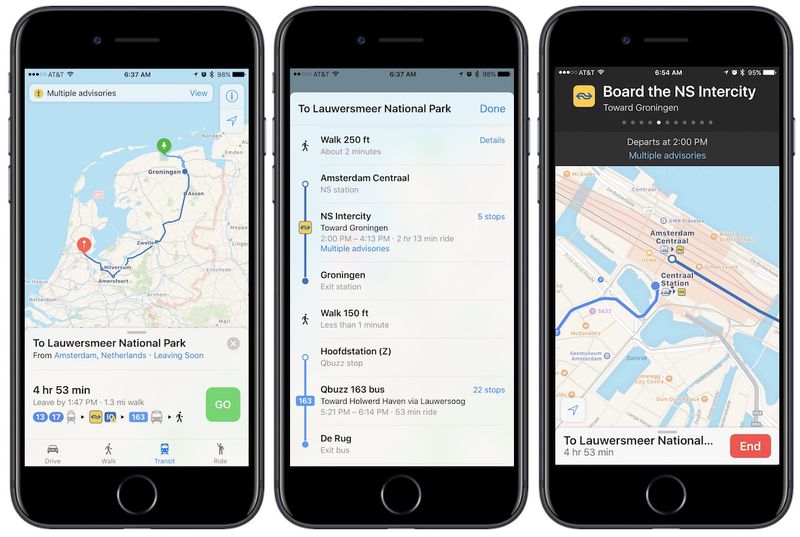 Transit in the Netherlands includes up-to-date advisory information with the help of data accumulated from various local transportation companies including NS, Connexxion, and GVB (via iPhoned). With the data, Apple Maps can warn users about reduced service, or a complete service shutdown, and update their transit trip directions accordingly.

Apple first added in a small amount of transit data to various Dutch cities last week, including the appearance of train, tram, and metro stations for a few areas, but had yet to turn on live schedule information for public transport. Most recently, areas including Singapore and Adelaide, Australia have received transit updates in Apple Maps.

Transit directions first launched with iOS 9 back in 2015 with just a handful of cities supported, but now Apple has kept up a consistent pace with adding new areas all over the world. In total, more than 10 countries now include transit directions, as do most major United States cities like Boston, Chicago, New York, and Los Angeles. It appears the rollout in the Netherlands will be ongoing since the area has yet to appear on the supported transit list on Apple's website.

iTom17
It comes totally unexpected to me. Not so long ago there was this article on the Dutch website iCulture.nl, about some 'preparations' rolling out in Apple Maps for Transit directions in The Netherlands. The assumption was it would see its full roll-out with iOS 11, but apparently Apple chose to release it earlier. I think it's a great move. One of the features I was really looking forward to.

It works very well I think. Would be nice to be able to see at what platform trains stop, but overall it's very good. Now I can actually ditch the third-party 9292 app that is commonly used in my country for transit information. It's a good app, but the fact that Transit in Apple Maps seems to work so well AND that it is integrated with Siri as well is great. Works on my iPhone, Mac and even my Apple Watch. Will definitely be using it to its full extent. :)

When Google maps transit was in iOS5 it converted every country and major city!

OK, we will go through this one more time. Yes, if Apple wanted to do what Google did, they could simply import all of the transit data at once and Voila, you'd have it in every major city today. However, Google has been heavily criticized for the accuracy, etc., of its transit data, and Apple, after its debacle of a roll out, is committed to the best mapping experience possible. Thus, instead of simply importing all of the transit systems' data, ala Google, Apple has decided to customize each major transit region to make their transit more accurate and much more user friendly, which is hugely beneficial for transit users. The trade off is it obviously takes much longer to do this than simply importing the basic stock data.

This article explains very well the different approaches, and why Apple Maps approach is superior. Having used both, I am glad Apple didn't simply mimic Google.

When Google maps transit was in iOS5 it converted every country and major city!
Rating: 1 Votes
[ Read All Comments ]