After posting a few images yesterday that claimed to show cases for the upcoming 10.5-inch and 12.9-inch iPad Pro, Benjamin Geskin has now shared a few CAD images, dummy models, and renderings of the 10.5-inch iPad model. The first set of computer-aided design drawings are based on the model that case manufacturers have received from the factory, which Geskin said is "already in mass production."

The new iPad images align with all of the port cutouts seen in yesterday's wooden accessory case, including a device that has four speakers, a Lightning port, camera with vertically-aligned flash, side volume rockers, and a Smart Connector. 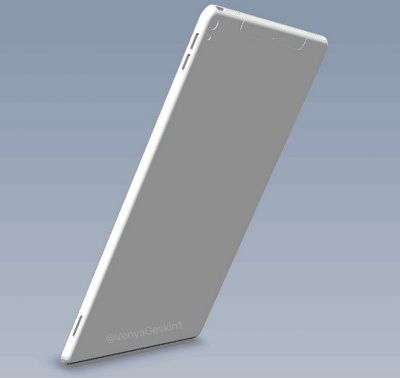 Last year it was rumored that the new iPad model with smaller bezels -- which fluctuated between 10.1-inch, 10.5-inch, and 10.9-inch display sizes -- could get four microphones.

Geskin has also shared a case manufacturer's dummy mockup of the 10.5-inch iPad Pro, which continues showing the same ports for volume buttons, 3.5mm headphone jack, speaker grilles, Lightning port, SIM card tray, and Smart Connector. All of the images support the rumors that the new iPad will pack in a 10.5-inch display into the same form factor and nearly identical size of the 9.7-inch iPad.

A rendering of the 10.5-inch iPad
In regards to a release date, KGI Securities analyst Ming-Chi Kuo recently said that there is a greater than 70 percent chance of Apple debuting the 10.5-inch iPad at WWDC in June. Although WWDC keynotes are traditionally the home of software announcements, even updates to the MacBook, MacBook Pro, and MacBook Air are rumored to be coming at the event this year.
Related Roundup: iPad Pro
Buyer's Guide: 11" iPad Pro (Don't Buy), 12.9" iPad Pro (Don't Buy)
Related Forum: iPad
[ 83 comments ]

Wiesenlooser
The problem with the iPad is not the hardware. The iPad is great as it is. The problem is the sofware and a new shiny device is not going to fix that.

On the other hand, it doesn't hurt either. But they have to invest the same amount of energy into the software.
Score: 23 Votes (Like | Disagree)

rudychidiac
I expected a more drastic redesign (I wish they would get rid of the chamfered edges)
Score: 13 Votes (Like | Disagree)

jacobh101
If this thing ships with a headphone jack I am going to flip out.
Score: 7 Votes (Like | Disagree)

I'm waiting for a razor thin

Why would you want want this? Lay a razor blade down on a flat surface where an iPad might be placed. Now pick it up. Repeat as often as you handle an iPad.

Now imagine that razor blade at iPad size. Put a little pressure on the middle of it and watch it bend (easily).

I realize that Apple has done an incredible job of making us think "thinner" = "the future," but there is always a "thinness" limit for the utility of any tool. In other words, there's a point where thinner works increasingly against the tool's owner. While you are not the only person who thinks he/she craves "thinner", it is highly unusual to see any of "us" making comments about how existing iDevices are much too thick.

IMO, "thinner" continues to be one of those solutions in search of a problem (that almost nobody seems to have)... spun such that we are conditioned to imagine that the next generation of anything from Apple must be thinner. For what exactly? What does even "thinner" get us with something like this?
Score: 5 Votes (Like | Disagree)

xgman
No wonder ipad sales are declining. If it looks like this it won't do much to change that. Apple is afraid to go bold. It's getting boring.
Score: 5 Votes (Like | Disagree)
Read All Comments