Many Apple Stores Set to Receive Overnight Makeover on May 16

MacRumors has learned that Apple is planning to quickly refurbish several of its retail stores after closing time on May 16, with the overnight transformations to be completed by the time each store reopens on May 17. These dates may slightly vary between now and May 20 depending on the store. 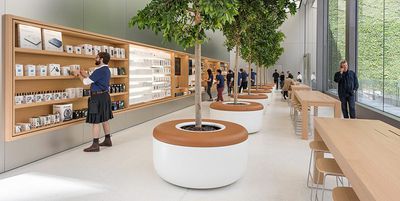 Older and smaller Apple Stores that have yet to be fully renovated with the company's next-generation retail design will receive new fixtures that mirror the updated look and feel as much as possible, according to a source. We're hearing this is a worldwide effort, and every older-generation store may be involved.

Apple plans to replace its existing accessory shelves in each store with what it calls the Avenue, as pictured above, a person familiar with the matter said. Apple will also be adding more "feature bays" to each store for displaying products and accessories, and new stools for the Genius Bar and other seating areas.

Here's how Apple described the Avenue when it opened its flagship Union Square store in San Francisco last year:

“The Avenue,” inspired by the window displays along a boulevard that dynamically change with the season. Avenue walls are interactive themed “windows” where Apple’s products and services come to life, from music, to creativity, apps, photography and more. New “Creative Pros,” Apple experts in creative arts, offer advice and expertise at each of the displays. Customers will also find “Only at Apple” products on the Avenue, a curated collection of third-party accessories.

Apple will significantly reduce the number of accessories it keeps on display on the sales floor, but it will still have ample stock in the back of the store, the person said. A customer interested in purchasing an accessory that isn't readily shelved can simply ask an employee, who will grab it from the back.

Apple has over 35 next-generation retail stores around the world, including locations in Brussels, Dubai, London, Mexico City, New York, Paris, San Francisco, and elsewhere. It has also fully updated and expanded many existing stores with the new look, but those larger renovations usually take several months.

Apple has 460 other retail stores, however, and this quick facelift will bring many of them closer in line with the newer aesthetics.

filmantopia
I hope each store will now include an employee wearing a kilt.
Score: 33 Votes (Like | Disagree)

tempusthales
I guess the picture is from Scotland.
Score: 31 Votes (Like | Disagree)

killawat
As soon as I saw the kilt I knew this thread would deliver.
Score: 12 Votes (Like | Disagree)

kemal
I was all ready to deliver the usual snark about the Mac Pro delays. Screw it. Sell those skirts Angela.
Score: 6 Votes (Like | Disagree)

IbisDoc
"A customer interested in purchasing an accessory that isn't readily shelved can simply ask an employee, who will grab it from the back."

Waiting for an employee is already a complete disaster.
Score: 5 Votes (Like | Disagree)
Read All Comments