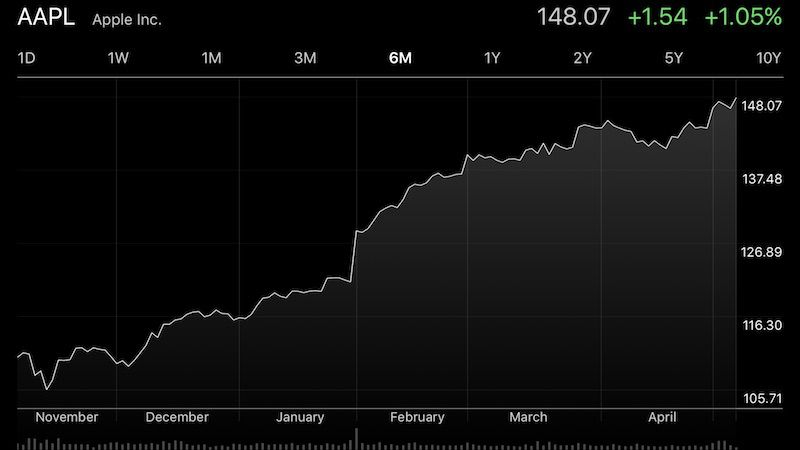 Apple shares are currently trading for roughly $148, slightly above Tuesday's closing price of $147.51, set just before the company's earnings report. The stock had dropped to as low as $144.27 on Wednesday, but Apple has bounced back since alongside an overall rise in the S&P 500 index today.

Wall Street remains bullish on Apple heading into the second half of the year, as most analysts think the so-called "iPhone 8" with an OLED display and wireless charging will be a hit among customers. There's also a larger than usual "supercycle" of customers with older iPhone models due to upgrade.

MacRumors obtained research notes from 19 analysts tracking Apple, and 15 of them continue to rate the company's stock as a "buy" or equivalent following the company's second quarter earnings results. All but three analysts believe that Apple's stock price could rise to between $150 and $185. 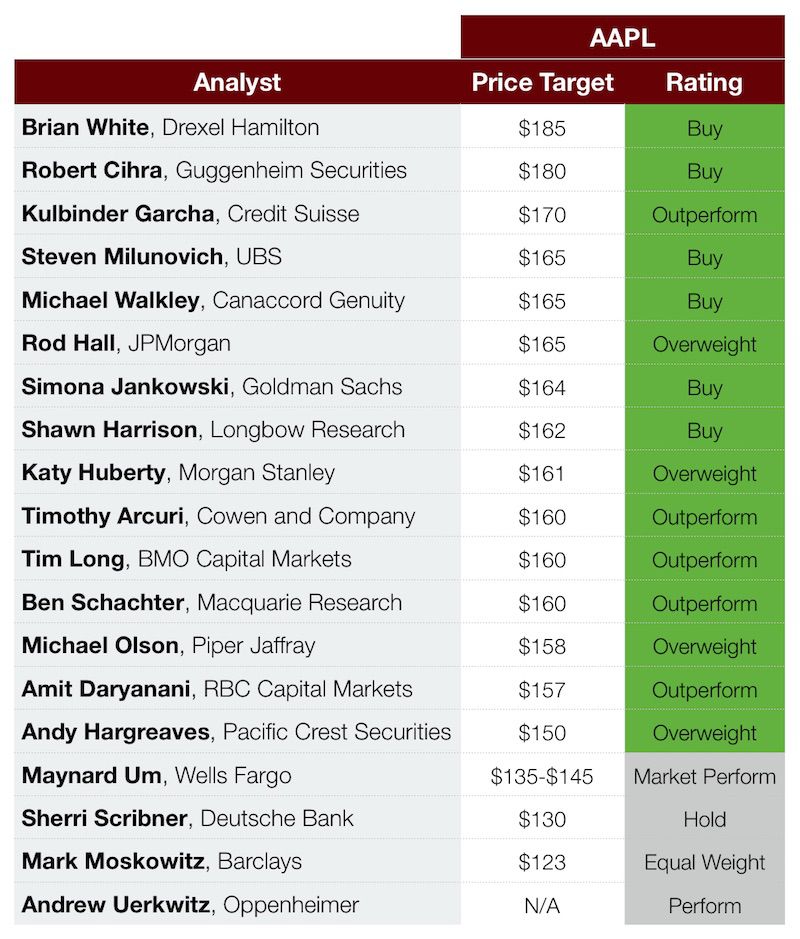 Apple's stock has been steadily climbing in value since dropping to a 52-week low of $89.47 in 2016, when the iPhone maker reported its first decline in annual revenue since 2001, and its first drop in iPhone sales ever.

Investors have rose-tinted glasses, as they see new catalysts of material growth in Services and wearables, and the iPhone 8 supercycle approaching.

Not to mention Warren Buffett speaking of Apple like a teenager in love, a very uncommon sight.
Rating: 4 Votes

don't, you should be selling high, not buying


If only it were that easy.
Rating: 2 Votes

Not sure why some have a sell recommendation with a good PE ratio as Apple does?


Probably because they want some people to panic so they can buy it cheaper themselves.
Rating: 2 Votes

12/31/2017 results are going to be critical. 12/31 quarterly sales increased by about 10 million per year from 2007 to 2014 and pretty much plateaued after that at about 75 million phones sold. Apple is going to need substantial growth to maintain its valuation.

With Tim Cook publicly blaming the hype surrounding the iPhone 8 in delaying customers' purchases then he had better be confident those delayed sales will translate into higher than normal sales at the end of this year. Tim Cook should be praying sales exceed 90 million with a heavy bias toward the iPhone 8.


Have an idea praying has nothing to do with it.
Rating: 2 Votes

ApfelKuchen
That post-earnings call "drop" was pretty small to begin with, essentially wiping out just the previous couple of days' gains. It was amusing to watch the headlines in the financial press on Wednesday, blaming the Dow's (small) drop on Apple, even as Apple's price was recouping most of the overnight drop as the day wore on, closing around 0.5% down from Tuesday's close.

One might attribute the drop after Tuesday's close purely on program selling - investors who had determined to "sell on news" regardless of what the results might be.
Rating: 2 Votes

CarlJ
It seems like it's always that it misses "expectations" (what outsiders are guessing) rather than missing "guidance" (what Apple predicts). Wall Street is weird.
Rating: 2 Votes

The focus on Apple's short-term stock price fluctuations is meaningless. Steve Jobs didn't care about future share price, he cared about future products. Make great products and the profit will follow was his philosophy.

Tim Cook seems to be the polar opposite. Keep trumping statistics about how well Apple has performed in the past to prop up the share price. Come up with excuses why iPhone sales dropped this quarter. Steve wouldn't have cared about the drop other than to see if there was a product issue that needed to be improved.

Seth Godin says "Profit is often a measure of short-term imbalances or pricing power, not value." That is very true, particularly in a potentially commoditized market like technology. Steve Jobs was always one step ahead of the competition. He kept the short-term imbalances tipped in favor of Apple by constant innovation and improvement. He focused on anticipating what product the customer would want to buy a year or more in the future. He instinctively knew when technology would mature into a product ready for consumer use. Apple always had something new and exciting; Steve Jobs' "One More Thing" moment at the end of a keynote.

The old product-focused Apple died with Steve Jobs. Tim Cook is more akin to Microsoft's Steve Balmer. Without some new product category innovation in the near future I suspect Apple's long-term stock chart will look significantly flatter in ten years than it has over the past ten.


I'm not sure I believe all your analysis. But you speak the truth in that Tim Cook is not Steve Jobs. Even though I very much miss Steve's POV on technology and his obvious impact on products, it's not bad to have a new head of the company who is his own person and worked for a long time under Steve. The disaster would have been someone TRYING to be Steve Jobs (Scott Forstall?). I have followed Apple for my entire adult life. Worked for them once years ago. I don't think they have taken a 'dive' or that Tim Cook is some how sabotaging the company. He will lead it differently. But so far I haven't seen ANY of the issues that effected Steve Ballmer's run at Microsoft. Tim wasn't a sales guy he came from supply and sourcing ETC. Apple is not the Apple it used to be, but that's OK. Nothing stays the same. The issue is do you wisely change with the times or fight to stay in some imaginary past. Steve never looked back. Remember when he came back head them remove the Apple 'museum' at the headquarters. Apple will be successful if they keep looking forward. And they do have to pay some attention to stock, unfortunately. But I think the company has benefited from having a person who KNOWS he is not Steve Jobs as it's leader. An imitator would have been distasterous.
Rating: 2 Votes


Silly. A better wish is to have bought some when it was under $3 (adjusted), and held on.
Rating: 2 Votes

Silly. A better wish is to have bought some when it was under $3 (adjusted), and held on.


Wish I had the stocks Forest Gump had in the movie :D
Rating: 2 Votes