Apple updated its website on Wednesday with U.S. job creation numbers from 2016, revealing that the company has generated a total of 2 million jobs across all 50 states. 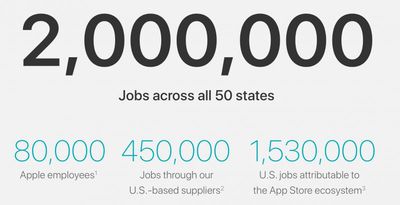 Across the U.S., 29 cities are home to at least 250 Apple employees, while 44 states have an Apple Store. Apple says it has seen a 28x increase in employment outside of California since 2000, with a 1,500 percent growth in U.S. employees as a whole since 1998.

The dedicated web page also provides a state-by-state breakdown of the above figures and highlights some of Apple's major U.S. investments, including its Cupertino headquarters, data centers in North Carolina, Oregon, and Reno, and campuses in Arizona and Texas.

The website changes come on the same day CEO Tim Cook announced that Apple is creating a new $1 billion fund for advanced manufacturing, in a further effort to promote U.S. job creation.

Ries
I create jobs too! Tons of jobs linked to me!

I buy food.
I **** in the toilet. The infrastructure and it runs to the wate disposal plant.
I take the train to work!
Eat prepared food!
Throw out garbage, more jobs!

Rogifan
What's the source for this 2M figure? Apple buys glass from Corning therefore anyone who works at Corning is a job created because of Apple? Seriously?
Score: 8 Votes (Like | Disagree)

smacrumon
The "statistics" on Apple's website are complete rubbish! Apple can't claim 1.53 million US jobs as their own creation.

99% of those “US jobs attributable to the App Store ecosystem” are casual/part time, self made developers struggling to make a cent. These individuals were also already coding and writing apps well before Apple came along.

Apple needs to provide a full breakdown of App Store profits, and who is making the total sum of the profits. I’d argue 99% of those in the Apple Store ecosystem are making less than 1% of the profits.

Complete utter rubbish. All Apple can claim is 80k direct Apple employees, that’s it. If Apple wants to talk supplier employees, then let’s get real and talk about 1 million employees at Apple’s offshore Chinese and other overseas factories. That's where the majority of Apple's employees work if we're talking about "jobs attributable" and other such nonsense.

The clues to the truth is actually found in what Apple omits and does not include in the discussion. Apple lies to customers so much it’s disgraceful. The stats on Apple's website are completely flimsy and the production of an ametuer marketing team. The stats completely discredit the Apple brand, they are totally bogus.
Score: 7 Votes (Like | Disagree)

Oh please MacRumors, can you bring back the down vote option.

Why would you want to downvote him anyway?
He's right.
Score: 4 Votes (Like | Disagree)

99% of those “US jobs attributable to the App Store ecosystem” are casual/part time, self made developers struggling to make a cent. These individuals were also already coding and writing apps well before Apple came along.

I've got an entire floor of here at work with developers creating/updating apps for iOS and tvOS.

Any company that has an app has developers...
Score: 3 Votes (Like | Disagree)

I create jobs too! Tons of jobs linked to me!

Complete utter rubbish. All Apple can claim is 80k direct Apple employees, that’s it. If Apple wants to talk supplier employees, then let’s get real and talk about 1 million employees at Apple’s offshore Chinese and other overseas factories. That's where the majority of Apple's employees work if we're talking about "jobs attributable" and other such nonsense.

What's the source for this 2M figure? Apple buys glass from Corning therefore anyone who works at Corning is a job created because of Apple? Seriously?

If you go to their webpage and actually read it, they do provide sources for these numbers. Admittedly I lack the economics background to validate them personally, but the footnote for "suppliers" includes this:

Analysis Group analyzed Apple’s impact on the U.S. job market and economy by using information on the total amount Apple spent on goods and services in the U.S. in 2016, and applying that information to Type-1 employment multipliers developed by the U.S. Bureau of Economic Analysis

Which, to me, sounds like it's based on the amount they spend with those suppliers, so they're not just assuming that every single employee job there has been "created" by Apple. Anyone with a more economics-y background able to shed more light on this?

It's fine to have a go at Apple for just making up nonsense if that's what they're actually doing, but you should at least read the information they're making available first. C'mon people — this is a perfect example of the sort of automatic knee-jerk Apple-bashing and negativity that people here complain about!
Score: 3 Votes (Like | Disagree)
Read All Comments