AT&T today sent out emails to customers who continue to have a grandfathered unlimited data plan for the iPad, informing them that its unlimited status is essentially being eliminated on May 24, 2017.

Going forward, customers with an unlimited tablet data plan may see their data usage throttled when using more than 22GB of data during a single bill period. According to AT&T, data may be slowed down during times of network congestion. 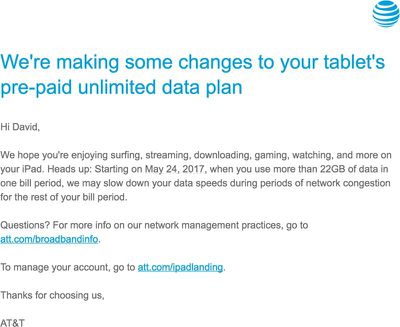 While that's in line with AT&T's policy for its newly announced unlimited data plans, it's a big change for iPad owners who are not used to having a data cap in place. Prior to the change, iPad owners with the grandfathered unlimited plan have not been subject to restrictions.

AT&T briefly offered unlimited iPad data plans after the original iPad was released in 2010, but phased them out just months later. Since then, customers who managed to purchase one of the plans have been able to hold onto them, making the unlimited plan highly coveted.

The plans required no contract and cost $29.99 per month, with customers able to transfer them to new iPads and even sell them to other iPad owners. With the change coming on May 24, the original unlimited iPad data plans will be much less attractive.

XTheLancerX
I hate when articles are so misleading and click-baity like this. It's still unlimited. Users will still likely be able to use 30, 40, 50, even 100GB and beyond on their iPad. It IS NOT a throttle. It IS NOT a data cap.

What it IS, is deprioritization. Your data is prioritized lower than other users ONLY DURING TIMES OF CONGESTION. And that doesn't mean you are going to see a hard cap to your speeds, you are just going to see slightly slowed speeds so that other users will have enough bandwidth and higher priority.

This is why everybody is so wrongly antagonistic and hostile toward the new unlimited plans, because they are convinced there is a 22GB **CAP** where you will be throttled down to unusable speeds. That is NOT the case, and people are unable to understand that because of constant misleading articles such as this.

Yes, speeds *might* be slowed. But only in areas that are very congested. Most users are not going to be on a super congested tower all the time where you'd actually see this "deprioritization".
[doublepost=1493429025][/doublepost]

Data caps are a scam.

It is NOT A DATA CAP.

Another reason to switch from att. I really can't think of a reason to use them anymore.

You're overreacting. Besides, you will have the exact same "limit" (that really isn't even a limit) on every other carrier.

It is not a cap. It is a threshold at which users will see lower priority. If the tower is extremely congested, then their speeds will be slightly slowed so that other users will have usable speeds. No, it isn't going to strictly limit speeds to 128kbps or anything like that at all. What it might do, is reduce ALREADY SLOW SPEEDS. The network experience would already suck, even when not deprioritized.

For example, if the tower can only put out 5mbps to you because of congestion, then while deprioritized you might see something more like 1-2mbps. And this might only happen for a moment, as well. When there is less traffic again, speeds will go back to normal and be the same for everybody, those who are past the 22GB threshold or not.

I am sick of articles such as these misleading people.
Score: 52 Votes (Like | Disagree)

I've always wondered how they determined the number "22" was too much used data.

They use an advanced analytical device:

Amacfa
Data caps are a scam.
Score: 26 Votes (Like | Disagree)

justiny
I've always wondered how they determined the number "22" was too much used data.

pdaholic
My wife was fed up with AT&T, and coerced me to give up my grandfathered unlimited data plan to switch to T-Mobile. Our bill went from $170 per month on AT&T to $80 per month on T-mobile with unlimited everything. And lots of percs on T-Mobile. Wish I had dumped AT&T long ago!
Score: 16 Votes (Like | Disagree)

OneMike
Another reason to switch from att. I really can't think of a reason to use them anymore.
Score: 11 Votes (Like | Disagree)
Read All Comments