Apple has asked the California DMV to alter the rules that require it to publish detailed public reports about the success of Apple's self-driving car tests, according to papers shared by the DMV. If the DMV complies with Apple's request, less information would be included in the reports. [PDF]

In a letter, Apple says it is "investing heavily in the study of machine learning and automation, and goes on to say the company is "excited" about the potential of automated systems in many areas, including transportation. 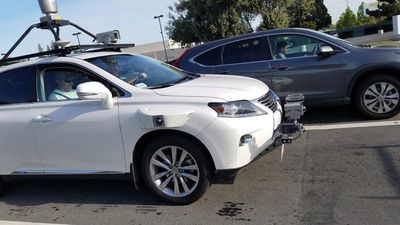 One of the SUVs Apple is using to test its autonomous driving software, courtesy of Bloomberg
The company then proposes that the DMV "amend or clarify" its positions in the areas of disengagement reporting, definitions, and testing without safety drivers. Apple is concerned that inconsistency in how permit holders reports disengagements can lead to media coverage that causes public confusion and misunderstanding. Apple wants disengagement reports to cover times when a driver takes control of a vehicle to prevent a crash or traffic violation, and little else.

A disengagement should be defined as an unexpected event or failure that requires the safety driver to take control of the vehicle in order to prevent a crash or traffic violation.

Additionally, the proposed requirement in §227.50(b)(3)(B)(vi) to describe the type of incident that would have happened without the disengagement should be removed. It requires speculation about future events that have not occurred.

Apple two weeks ago was granted a permit for testing autonomous vehicles on public roads, and has already begun to do so. The company has three Lexus SUVs equipped with sensors and cameras, presumably running the autonomous driving software the company has been working on for the last several months. Those SUVs have been spotted on Cupertino roads this week.

By participating in the DMV's Autonomous Vehicle Testing Program, Apple will need to publicly share many details about its testing process, which will make it difficult to keep development on the software under wraps.

I hope to God I'm never near one of them on the road then! I do sincerely hope the regulators tell Apple where to go. If others have to follow the rules so can Apple NO EXCEPTION!

As for: "Apple wants disengagement reports to cover times when a driver takes control of a vehicle to prevent a crash or traffic violation, and little else."

Is that not an attempt to gag any stories about when these cars screw up and crash? It reads like that to me!
Score: 22 Votes (Like | Disagree)

69Mustang
Noooooooope!!! I sincerely hope the DMV tells Apple to pound sand and either follow the policies or exit the autonomous vehicle testing. Less disclosure is not a benefit to anyone. Period.

There's a reason so much disclosure is required. Public safety. Apple's desire to shape the narrative with selective disclosure shouldn't be given any weight by the DMV. This isn't commodity consumer tech products and shouldn't be treated as such.
Score: 19 Votes (Like | Disagree)

Stella
So, apple want secrecy? How about No.
Score: 18 Votes (Like | Disagree)

Or you could have read the article and understood that this is Apple asking the regulators to cover up loopholes that prevents competitors to cheat in tests.

Not sure if you actually read the article. This has nothing to do with closing loopholes or cheating. It's about having the ability to selectively report disengagements. Apple doesn't want to report all of them. Says so right in the article.
Score: 15 Votes (Like | Disagree)

A disengagement should not be reported for the following:
- Operational constraints where either the safety driver has been trained to disengage the system, or when the system detects the constraint and disengages automatically. For example, a system that requires the safety driver to navigate through a construction zone.
- System errors or failures. For example, a software bug or sensor dropout that does not affect the safe operation of the system.

These are exactly the cases where it should be reported...

Less disclosure in something safety-sensitive is not acceptable. There are literally lives at stake when these products hit the road. Fortunately iTunes has not learned to drive a car yet.
Score: 14 Votes (Like | Disagree)
Read All Comments