Apple today released a revised version of iTunes 12.6, which appears to eliminate a hidden option that may have accidentally been built into the software release.

Shortly after the original release of iTunes 12.6 on Tuesday, a reddit user discovered a "Show on Profile Page" toggle on a Playlist edit page. 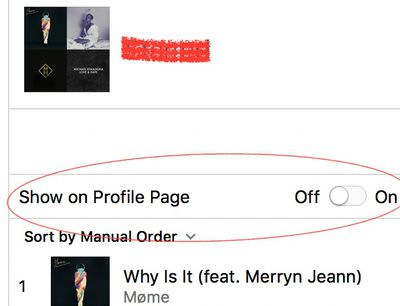 The toggle didn't appear to do anything because there's currently no individual profile page feature in iTunes, and now the non-functional feature has been eliminated from the 12.6 iTunes release, suggesting it was added by mistake and could be destined for some kind of future iTunes profile addition.

It is entirely unclear what a Profile Page might entail, but reddit users speculated that it could be for a future social network or a Spotify-style searchable playlist database.

The new iTunes 12.6 update can be downloaded from the Mac App Store for free. It includes a "Rent once, watch anywhere" feature that lets iTunes users watch iTunes movie rentals across all devices with the as-of-yet unreleased iOS 10.3 and tvOS 10.2 updates.

I believe this was released yesterday, not today. But no matter :)

Yes, I received the update yesterday, and checked the build numbers to figure out if it was the App Store being confused or an actual update from what I had installed.

I wish Apple was more transparent with their changelog notes.


* "Removed non-functional toggle switch that was intended for a future release"
Score: 6 Votes (Like | Disagree)

The other day, I was looking at the box of one of my iPod classics and it mentioned Ping and I laughed. Goes to show that even under Steve, Apple could produce absolute failures
Score: 3 Votes (Like | Disagree)

zorinlynx
Bah, they didn't fix the annoying UI bug that makes the "X" disappear on the miniplayer so you can't restore it to the normal player without resizing it. :P
Score: 3 Votes (Like | Disagree)

That alone is worth the update to me.