The eighth macOS Sierra 10.12.4 beta is available for download through the Apple Developer Center or the software update mechanism in the Mac App Store for those who have previously installed a beta. 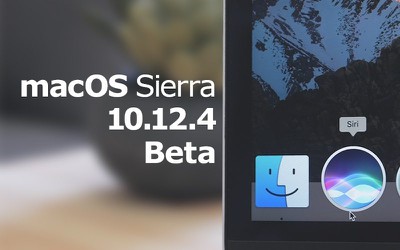 Few outward-facing changes have been discovered in macOS Sierra 10.12.4 outside of the first beta, as Apple has been working on bug fixes and improvements ahead of a public release. With the eighth beta out and the short interval since the last seed, we are getting closer to the end of the beta testing period and are likely to see a public release soon.

jbachandouris
My life is so lame, that this is the most exciting thing to happen to me all day.
Score: 27 Votes (Like | Disagree)

MacFever
Nightshift is all good... but when will we get a full dark theme option through out the MacOS.

theitsage
Hoping for new Macs tomorrow. There are changes to drivers and kext files for Polaris GPUs.
Score: 7 Votes (Like | Disagree)

thadoggfather
How much polish does the f.lux knockoff, I mean macOS Night Shift feature need?

My life is so lame, that this is the most exciting thing to happen to me all day.

Not to worry. There'll be an endless stream of betas until you reach old age
Score: 6 Votes (Like | Disagree)

GubbyMan
Eight betas! Can I trust them and download the stable version as soon as it is released or should I wait and see if there are any major bugs that could brick my MacBook? :rolleyes:
Score: 3 Votes (Like | Disagree)
Read All Comments

Friday July 30, 2021 9:04 am PDT by Sami Fathi
Tesla CEO Elon Musk reportedly once demanded that he be made Apple CEO in a brief discussion of a potential acquisition with Apple's current CEO, Tim Cook. The claim comes in a new book titled "Power Play: Tesla, Elon Musk and the Bet of the Century," as reviewed by The Los Angeles Times. According to the book, during a 2016 phone call between Musk and Cook that touched on the possibility of ...
Read Full Article • 169 comments