macOS Sierra 10.12.3 is a free update for all customers who are running macOS Sierra. The update can be downloaded using the Software Update function in the Mac App Store. 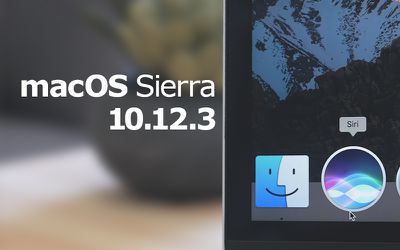 No specific changes, bug fixes, or feature additions were discovered during the beta testing process, and Apple only said the update "improves the stability, compatibility, and security of your Mac." Apple's release notes paint a more complete picture, stating that the update improves graphics switching for the new 15-inch MacBook Pro, fixes issues with Adobe Premiere, and includes important fixes for Preview.

The macOS Sierra 10.12.3 Update improves the stability and security of your Mac, and is recommended for all users.
This update:

macOS Sierra 10.12.3 will likely soon be followed by another update, as Apple has been committed to regularly making updates to the operating system since its September release.

Apple, what are you doing these days?

Swimming in the money vault...

Admittedly no version of OSX has been perfect. However, I do not recall any of this being an issue with such as Snow Leopard.

People like to paint a grass-is-greener picture of Snow Leopard, but it's not as though that version was perfect. There were eight point releases for it, one of which (10.6.3) needed a "Supplemental Update" because its original release had some issues.

There were also weird off-shoots like the "Snow Leopard Font Update". Which, incidentally, included PDF-related fixes.

You'd think something like DVD playback and Ethernet connections would be rock-solid by the seventh major release of OS X. But alas. They weren't.

Perhaps someone could explain how that once working fine no longer does several versions later?

Well, regressions generally happen when code is modernized, optimized, or for other reasons replaced by an equivalent. In this case, Apple appears to have tried to unify some of the PDF code between iOS and macOS. One positive effect of this is that you can now print to PDF from any iOS app (though the UI to do so is bizarre ('https://9to5mac.com/2016/09/18/how-to-print-to-pdf-from-iphone-and-ipad-ios-10/')). The negative effect is lots of breakage ('http://mjtsai.com/blog/2016/12/21/more-macos-preview-pdf-trouble/') in the meantime.
Score: 13 Votes (Like | Disagree)

realeric
Safari still kills entire system on specific websites, with intel 4600 GPU. Apple, what are you doing these days?
Score: 13 Votes (Like | Disagree)

macOS Sierra 10.12.3 will likely soon be followed by another update, as Apple has been committed to regularly making updates to the operating system since its September release.

jsw
I just returned my 15" MBP (stock, low-end 2016) after 13 days because I had numerous issues, including Touch Bar freezes, spontaneous reboots, and this lovely screen of colored static on multiple occasions (which doesn't appear to be listed as an issue or one that's fixed):

and also because of obvious places Apple didn't update the OS to realize the Touch Bar was there. Example from when I restored macOS prior to returning it (note how the user is asked to hit the Escape key for help... and yet the Escape key [and entire Touch Bar] isn't visible - and couldn't be make visible, at least in my attempts):

I hope this update fixed similar issues for others, but I've decided to wait until the next hardware rev before I buy a new 15". I ordered a base 2016 13" (no Touch Bar) cheap at Best Buy this weekend, and I'll use that for now... if I decide it's worth the risk to open it. This 15" was the first Mac I've ever returned after opening it. I'm really disappointed in the number of issues I had over a relatively short period of time using it doing pretty much nothing but software development. These were, in my opinion, pushed out of the factory way before they should have been.

I get that OS updates are needed and that new hardware isn't going to be perfectly supported all the time, but come on. It sounds like, even after this OS bump, there are still going to be a lot of people with issues, and I had far too many different problems on a new system that I barely stressed. I miss the old days when they really did just work.