Rare Functioning Apple-1 Computer Headed to Auction in May

In 1976, Apple co-founder Steve Wozniak designed and built the Apple I, or Apple-1, the company's first computer. Of the 175 sold, only 50 to 60 or so remain in existence, including just eight functioning ones, making the iconic machine a rare collector's item worth significantly more than its original $666.66 price. 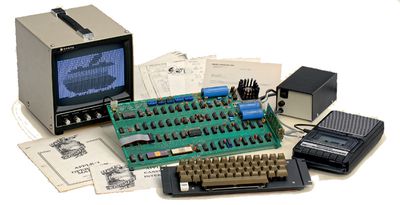 On May 20, German auctioneer Breker told MacRumors it will be auctioning off one of those eight functioning Apple-1 computers, complete with the original manual and documentation, the receipt for the motherboard and cassette recorder, and even a record of telephone conversations with Steve Jobs and Wozniak.

Based on previous Apple-1 auctions over the years, this latest machine is likely to fetch several hundreds of thousands of dollars. Breker said it auctioned an Apple-1 in comparable original and working condition for $671,400 in May 2013, while a functioning Apple-1 sold for $374,500 at a Sotheby's action in New York in June 2012.

The Apple-1 was a motherboard kit only and is pictured here with the rare original "NTI" sign. Apple never offered an external housing for the computer, and the peripheral equipment, such as the power supply, keyboard, monitor, and cassette recorder, had to be obtained personally by the owner.

pavelbure
Apple said this counts as a new Mac being sold this year.
Score: 39 Votes (Like | Disagree)

hotsauce
Winning bidder has option to purchase a dongle for $125,000
Score: 9 Votes (Like | Disagree)

Charles50
I'd recognize that Apple ][ keyboard anywhere. But it's not surprising that connects directly to the old motherboard, the same way it connected to the new one. I was going to buy an Apple 1 kit but it didn't come with a keyboard and I had no idea how to retrofit one. So I bought a SOL-20 kit instead. Oops.

I did some research and it appears the "pre-NTI" boards were an earlier production run, they switched to NTI as the manufacturer of their printed circuit boards at some point. I put together a picture showing the NTI board on top, and the pre-NTI on the bottom. I believe these boards are basically the same color of green but the bottom pic is overexposed due to use of a flash. You can see the NTI logo inside a diamond centered under the Apple Computer 1 label. That logo is actually etched in the board, it's the same metal as the circuit traces. It's common practice for manufacturers to add their logo on the PCB like this. If you watch the video, this Apple 1 does not have the NTI logo etched in the board, so I have no idea what they meant when they claim it includes the "rare NTI sign." I think they meant just the opposite, that it is rare because it does not have the NTI sign.

yaxomoxay
The Pipeline!!!!
Score: 6 Votes (Like | Disagree)
Read All Comments