The Eye Smart iPhone Case, an ambitious new project on Kickstarter, aims to expand the iPhone's functionality by adding what amounts to a full Android device to the back of the iPhone.

An always-on 5-inch AMOLED display is built into the case, which runs the Android 7.1 Nougat operating system. The case connects to the iPhone using its Lightning port to enable file transfers, power delivery, and more.


A microSD card slot provides up to 256GB of storage for holding photos, videos, and other media, all of which is accessible using the Android file explorer. A built-in 2,800 mAh battery provides additional charge to the iPhone, and the Eye case itself supports Qi wireless charging.

Two SIM card slots are included, and higher-end models support 4G LTE connectivity, so up to three phone numbers can be used with an iPhone. Android exclusive features, like native call recording, the file explorer, customization, file transfers, and Android apps are all made available to iPhone users via the Eye case.

The Eye will enable selfies with the higher-quality rear-facing camera of the iPhone by mirroring the iPhone's display to the back of the device. This allows for Portrait Mode selfies, according to the Kickstarter page.


A 3.5mm headphone jack lets iPhone owners with an iPhone 7 or an iPhone 7 Plus to use wired headphones with the device, and the Eye case includes NFC, an IR blaster and receiver for controlling TVs and other devices, and a car mount. It's available for the iPhone 6 and later, and will allegedly be available for the new wave of iPhones coming in 2017 within a month of their release.

While the Eye case looks intriguing, it also looks too good to be true, even with a prototype case shown off in images and videos. For that reason, we do not recommend backing this Kickstarter project.

ESTI is a first time Kickstarter company and a project this ambitious and at this scale will almost certainly run into problems with mass production, the step in manufacturing that most often trips up Kickstarter newcomers.

The Kickstarter campaign says the first units will deliver in August of 2017, a timeline that's likely going to be difficult to meet, so if you're interested in this product, it may be better to hold off until it is available outside of Kickstarter.

If you do want to back the project, the Eye case is available for a Super Early Bird pledge of $95, with prices going up for 4G connectivity. Estimated retail price is $189 to $229.

Jnesbitt82
An android screen as a protective cover for the iPhone? I guess android is good for something after all! :D
Score: 14 Votes (Like | Disagree)

Paradoxally
Flip your phone to reveal an inferior OS.

While the Eye case looks intriguing,

Certainly not the word I'd use.
Score: 7 Votes (Like | Disagree)

expand the iPhone's functionality by adding what amounts to a full Android device to the back of the iPhone. 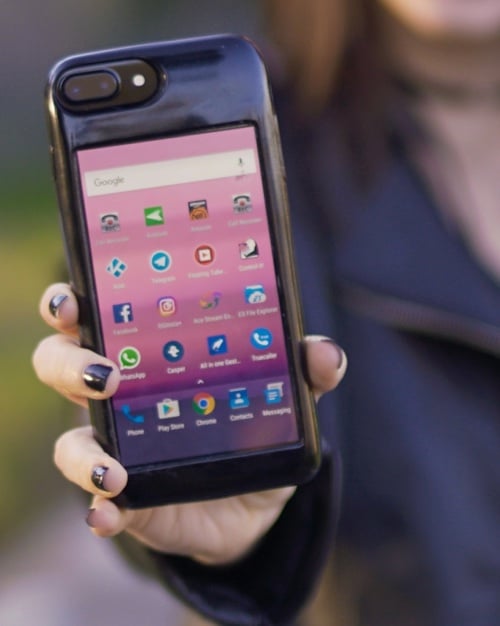 I'd rather my iPhone remain free of parasites.
Score: 7 Votes (Like | Disagree)

Fzang
This ad has to be some sort of satirical double bluff.
Score: 5 Votes (Like | Disagree)
Read All Comments

Thursday September 29, 2022 12:38 pm PDT by Juli Clover
Tony Blevins, Apple's vice president of procurement, is set to depart the company after he made a crude comment about his profession in a recent TikTok video, reports Bloomberg. Blevins was in a video by TikTok creator Daniel Mac, who was doing a series on the jobs of people he spotted with expensive cars. After seeing Blevins in an expensive Mercedes-Benz SLR McLaren, Mac asked Blevins what ...
Read Full Article • 526 comments