Apple is the fifth most reputable major company active in the U.S. according to an annual poll that gauges public perception of 100 consumer brands (via The Korea Herald).

The Reputation Quotient Ratings from the 2017 Harris Poll are based on an online survey completed by over 30,000 adults in the U.S. The survey analyzes brand reputation across six gauges: social responsibility, vision and leadership, financial performance, products and services, workplace environment, and emotional appeal. 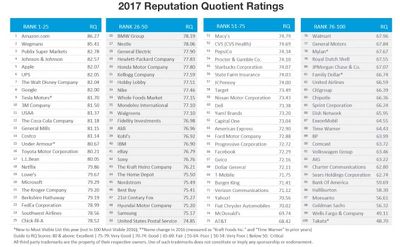 The Reputation Quotient Ratings saw Apple fall three places from the previous year, losing ground to Wegmans, Publix Super Markets, and Johnson & Johnson. Amazon meanwhile maintained its 2016 position at the top of the table, but the effects of the exploding Note7 phone debacle saw Samsung slump to 49th after last year ranking at seventh.

Other companies in the top ten include Google, which slipped from fifth in 2016 to eighth, and Tesla Motors, which was not included in last year’s rankings. Netflix and Microsoft both ranked in the top 20 (18th and 20th, respectively), with Facebook sitting at 66th.

According to Harris Polls, the biggest risks to a company's reputation are illegal actions by corporate leaders and lies about products or services. The poll was carried out between November 28 and December 16 of last year, so just before Consumer Reports denied Apple's new MacBook Pro line-up a buyer recommendation, based on perceived battery life issues. Consumer Reports later revisited the issues with Apple's input, and ultimately decided to award the laptops a recommendation in January.

Samsung meanwhile will be eager to resuscitate its brand in 2017 after some of its Galaxy Note7 phones caught fire, leading to the discontinuation of the model in October. However, the company had a setback last week when Samsung chief Lee Jae-yong was arrested over his alleged role in an influence-peddling scandal that has led to the South Korean president's impeachment.

discounteggroll
In other news, comcast held a company-wide celebration for not landing in the lowest 10 spots.
Score: 7 Votes (Like | Disagree)

faded_glory
In the UK Amazon has something of a reputation for not paying tax and for bullying its workers.
Score: 6 Votes (Like | Disagree)

62tele
Wait! Samsung is 49th?
Would it be wrong to bwahahahahaha?
Score: 5 Votes (Like | Disagree)

FRVRandAFTR
So, as a fan of Apple products, like everyone else that visits the site, there are so many things I applaud them for. However, I have no problem calling them out when they deserve it. They've had ups and downs since their comeback, so this is not an "If Steve were still around..." thing. BUT Apple customer service used to be the gold standard, over the last few years, from what I've noticed, it's gotten worse and worse. It seem's like the support staff is basically trained to tell you politely that they won't be doing anything to fix whatever issue you're having, but "[they're] very sorry to hear about it."

I can see why Amazon's topping the list, they're generally very good, and people seem to overlook the outsourcing because of that. But going back to Apple as of late, I've had Walmart provide better service.
Score: 5 Votes (Like | Disagree)

jhock
lol Amazon
They don't look after the warehouse workers
They dodge tax
They have little quality control over the goods on their site
Their products are full of fake reviews.

Surely this chart should be "who can cut corners and get away with it".
Score: 3 Votes (Like | Disagree)
Read All Comments