In Microsoft Word, the Touch Bar can be used with Word Focus Mode, which hides all on-screen ribbons and commands to put the focus on your work. The Touch Bar puts "the most relevant Word features" at a user's fingertips, allowing for quick style changes. 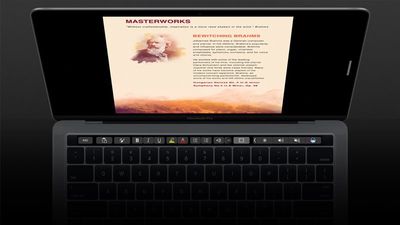 In PowerPoint, the Touch Bar makes it easier to manipulate graphic elements. A Reorder Objects button creates a graphical map of all the layers, so users can quickly find an object and move its position. There are also special controls that are available in Slideshow View.

With Excel, the Touch Bar displays the most recently used functions when the equals sign is typed into a cell, so it's quicker to do things like sum a range of numbers. The Touch Bar also provides access to borders, cell colors, and recommended charts.

Microsoft has also added new capabilities to the Touch Bar during its testing period. The Touch Bar can also be used to insert comments, photos, and hyperlinks into Word, it includes view-specific controls in PowerPoint, and there's an object rotation slider for Word, Excel, and PowerPoint.

Last week, Microsoft previewed Touch Bar support, providing it to its "Office Insider" beta testers, but now the service is ready to roll out to all Office users.

Touch Bar support is currently only available for Word, Excel, and PowerPoint, but Microsoft also plans expand it to Outlook and Skype for Business in the near future.

Mascots
I'm probably one of the few people thrilled to have contextual controls brought to the Mac's hardware.
Score: 7 Votes (Like | Disagree)

Mac version, the missing 10 represents the difference in features that MS gives Windows and not us ;) :D
Score: 3 Votes (Like | Disagree)

I'm probably one of the few people thrilled to have contextual controls brought to the Mac's hardware.

I love the touchbar. Some applications are so so in their use, but others Make the user experience incredible.

I usually get chastised on here when I say that. Will wait a year till everyone catches up to realising how good it really is.
[doublepost=1487278792][/doublepost]

Glad to hear people are finding the Touch Bar implementations are useful. I have Office 365, now I'm just waiting on the 2017 MBP to be released! (really hoping they can cram in a larger battery this year, otherwise I'll keep my 2014 which is still going strong)

MartiNZ
Wow really good to see MS doing this, would never before have described them as quick with the Mac office products.
Score: 2 Votes (Like | Disagree)

umm.. nothing. Really, nothing. Please send a screen grab if you are getting something! I may just reinstall the entire suite, then.

On my Touch Bar Mac with yesterdays update installed, when I click on either the To or CC field (and only these two fields) the Touch Bar shows the emoji icon directly to the right of the Esc. Then on the far right of the Touch Bar next to the Screen Brightness is the <keyboard that does the word fill in. Both of these are totally useless in those two fields since you only are going to be entering an email address or part of a name to before clicking on the Check Names toolbar icon. The Subject field loses the emoji icon, keeps the <keyboard and in the message body the Touch Bar is empty other than Esc and Screen Brightness, Volume and Siri. Outlook is the application I use the most in Office so I'm looking forward to a future update so it matches Apple Mail & Calendar.
Score: 1 Votes (Like | Disagree)
Read All Comments