Apple overtook Samsung to become the world's largest smartphone vendor in the fourth quarter of 2016 as shipments reached 439 million units.

According to independent research firm Strategy Analytics, global smartphone shipments grew 3 percent annually to hit a record 1.5 billion units in 2016. Apple shipped 78.3 million handsets in the fourth quarter of the year – around 800,000 more units than Samsung – allowing it to recapture its number one position with 18 percent global smartphone market share. 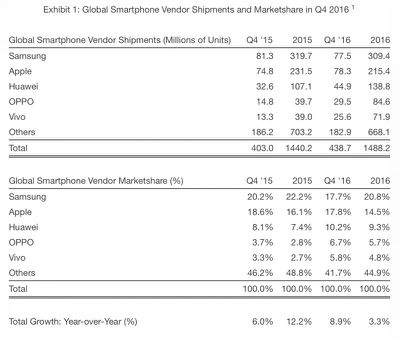 Bolstered by the popularity of the iPhone 7 and particularly the iPhone 7 Plus, Apple's 5 percent increase in shipments year-over-year helped it secure a 17.8 percent share of the global smartphone market, narrowly beating Samsung's share of 17.7 percent, which was negatively impacted by the company's Note7 battery fiasco. Samsung captured 21 percent share for the full year, marking its lowest level since 2011.

The research comes one day after Apple released its Q1 2017 financial results, in which it reported record results over what corresponds to the fourth calendar quarter of 2016. Cook was bullish on the iPhone's future, and talked up the smartphone's importance across a range of segments, including home automation, health, CarPlay, and enterprise. "I think the smartphone is still in the early innings of the game," Cook said during the earnings call. "App developers are still inventing and there are some exciting things in the pipeline that I feel really good about."

busyscott
Ironically, both had explosive performance in Q4.
Score: 23 Votes (Like | Disagree)

AllieNeko
Apple and Samsung have different release cycles. For Apple to NOT exceed Samsung in Q4 regularly, shows just how much bigger Samsung is.

The bigger question is - does it matter? Selling more **** will always get you more volume. Samsung's sales lead in units isn't due to flagship phones competing directly with the iPhone. It's due to the millions and millions of unbearably terrible rubbish phones they sell. At the flagship level, where Apple competes, they've always blown Samsung away.
Score: 18 Votes (Like | Disagree)

keysofanxiety
I don't think anybody a decade ago could have predicted the sales volume of the iPhone. The Nokia 3310 family sold 126 million units in its lifetime. Apple are nearly doubling that number annually. It's mindboggling.
Score: 13 Votes (Like | Disagree)

Total Click bait, I think macrumors is the troll in the room

Adithya007
It's more like Samsung's failure than Apple's own victory.
Score: 11 Votes (Like | Disagree)
Read All Comments