For a few years now, rumors have suggested Apple will be opening its second retail store in Cologne, Germany. The store is expected to be located on Schildergasse, a major shopping street in the city's core that sees some 13,000 people pass through every hour, making it the busiest shopping street in Europe. 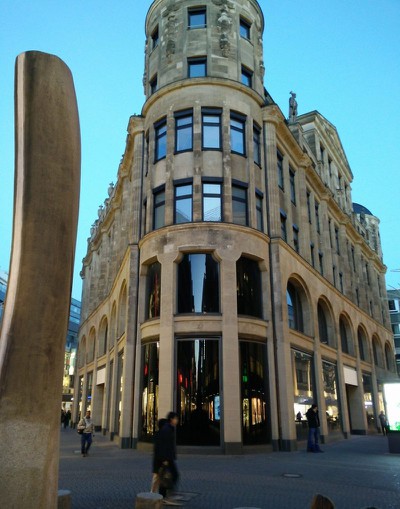 In April 2015, German website Macerkopf shared images of a building with blacked out windows on Schildergasse. The space was previously occupied by European clothing brand Pohland, which vacated the building earlier that year. Renovations have been underway ever since to transform the location into an Apple Store.

The renovation process had led to evidence including Apple's typical blacked out windows and close-up photos revealing Apple-like tables and markings inside. Apple also posted Cologne-based retail job listings in March 2016. And, now, we have our best evidence yet that Apple's second store in Cologne is nearly ready.

German website iFun.de today shared an image of a somewhat covered but still easily distinguishable Apple logo affixed to the building. The report claims the store will likely open in the second half of February. Apple will likely confirm the store's opening on its website in the near future—we'll share details when available.

Last week, French website iPhon.fr reported Apple is also planning to open a second retail store in Belgium in the city of Bruges by 2018.

automactic
At first glance at the title, I wasn't sure if the store is to be opened or closed. :-)
Score: 2 Votes (Like | Disagree)

At first glance at the title, I wasn't sure if the store is to be opened or closed. :)

itsmilo
Now get your ass to Stuttgart already! We got Porsche, Daimler and therefore lots of rich Häuslebauer
Score: 1 Votes (Like | Disagree)
Read All Comments

Friday January 15, 2021 1:46 pm PST by Juli Clover
Apple has started "early work" on an iPhone that has a foldable display, according to a new report from Bloomberg's Mark Gurman. Though testing of a foldable iPhone has begun, Apple has not committed to releasing a device that has a foldable display. Development has not yet expanded beyond a display and Apple does not have full foldable iPhone prototypes in its labs. Like foldable...
Read Full Article • 219 comments

Friday January 15, 2021 10:23 am PST by Juli Clover
Apple is developing two versions of the Mac Pro to succeed the Mac Pro that was first released in December 2019, according to a new report from Bloomberg. The first updated Mac Pro is a direct successor to the current Mac Pro and it will use the same design. It may also be equipped with Intel processors rather than Apple silicon chips, and it could be one of the sole machines in the Mac...
Read Full Article • 256 comments

Friday January 15, 2021 12:16 pm PST by Juli Clover
Surprise late night rumors last night provided us with our first in-depth look at what we can expect from the new MacBook Pro models that are coming in 2021, and there are some significant changes in the works. Along with additional ports, a new flat-edged design, and the removal of the Touch Bar, Apple's updated MacBook Pro machines will readopt MagSafe. MagSafe in the 2021 MacBook Pro...
Read Full Article • 195 comments