AT&T yesterday announced that its 2G wireless network was officially shut down on January 1, 2017, following four years of planning for its discontinuation.

As The Verge points out, the end of the 2G network means the original first-generation iPhone (also known as the iPhone 2G) will no longer receive cellular service from the AT&T network, effectively shutting it down.

Few people appear to have been using the original iPhone as there were no complaints from iPhone owners two weeks ago when the network was shuttered, but going forward, customers who keep the device as part of a collection will only be able to use it on WiFi. 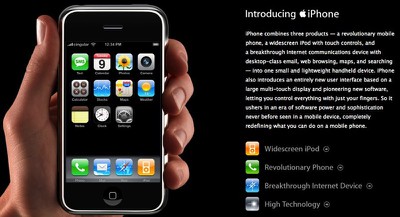 Originally released in June of 2007 and discontinued in 2008, the first iPhone was made obsolete by Apple back in 2013, and it has not received software updates since the 2009 release of iPhone OS 3, later renamed iOS 3.

While the end of the 2G network seems to have had little impact on iPhone owners, it did manage to cause significant issues for the San Francisco Muni bus and train system. NextMuni, used to predict arrival times of buses and trains, ran on AT&T's 2G network. Muni vehicles without upgraded systems installed don't show up on NextMuni, a problem that the San Francisco transit agency believes could take weeks to solve.

According to AT&T, shutting down its 2G network frees up valuable spectrum for future network technologies, including 5G. AT&T says the spectrum will be repurposed for LTE.

Appleaker
Very inconsiderate for those that are in a 10 year upgrade cycle.
Score: 93 Votes (Like | Disagree)

AngerDanger
Fortunately, the only folks who will be pissed are on 2G, so we won't see their comments for a while.

nighthawk67
"High technology" - when you create a ground-breaking device but have no idea how to describe it.
Score: 17 Votes (Like | Disagree)

"High technology" - when you create a ground-breaking device but have no idea how to describe it.

then they switched to "Magic."
Score: 15 Votes (Like | Disagree)

Return Zero
2G? I haven't seen an original iPhone used as a cell phone in a looong time... a long time.

viperGTS
To think that in about 20 years, they might be shutting down LTE networks in the same way. I wonder what technologies we'll have then!
Score: 11 Votes (Like | Disagree)
Read All Comments

Thursday June 4, 2020 7:38 am PDT by Joe Rossignol
The Information today published a detailed look at the difficulties Apple has faced trying to assemble its products with robots rather than humans. The report claims that, beginning in 2012, Apple assembled a team of robotics and automation specialists at a secret lab in Sunnyvale, California to search for ways to reduce the number of workers on its production lines. However, the team is...
Read Full Article • 143 comments

Friday June 5, 2020 7:51 am PDT by Mitchel Broussard
Amazon today kicked off a new sale on Apple Watch Series 5 models, starting with the 40mm GPS device for $299.00, down from $399.00. This discount matches the previous all-time-low price for this Apple Watch on Amazon, and is one of the best you'll find online right now. Note: MacRumors is an affiliate partner with these vendors. When you click a link and make a purchase, we may receive a...
Read Full Article • 18 comments

Friday June 5, 2020 12:31 pm PDT by Juli Clover
Some iPhone 11, 11 Pro, and 11 Pro Max owners have been noticing an unusual green tint to their iPhone displays when first unlocking the device, based on complaints shared on Reddit and the MacRumors forums. Image of green tint appearing briefly on the right, from MacRumors reader Oceannn It's not clear what's going on, but almost all of the affected users say that the green tint is visible ...
Read Full Article • 71 comments

Saturday June 6, 2020 1:51 pm PDT by Juli Clover
Apple plans to debut interest-free payment plan options for customers who purchase iPads, AirPods, Macs, and more using Apple Card, allowing them to pay for purchases over several months. According to Bloomberg, Apple will roll out the Apple Card feature in the coming weeks, with customers given up to 12 months to pay for their products before interest is due. The 12 month plan will be...
Read Full Article • 51 comments