At CES today LaCie announced "significant" updates for its LaCie Rugged and d2 computer storage solutions, beefing up each product with more speed, increased storage capacity, and better compatibility with modern computers, including Thunderbolt 3 on the LaCie d2. 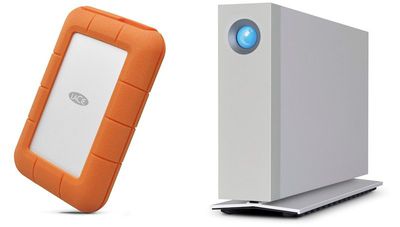 The updated LaCie Rugged Thunderbolt USB-C solution has support for USB 3.0-compatible computers, as well as models with USB-C and Thunderbolt 3, and includes an integrated Thunderbolt cable that works with both first-generation Thunderbolt and Thunderbolt 2. Capacity options are available up to 5TB, with included Seagate BarraCuda drives for speedy transfers. The top-of-the-line version includes a 1TB SSD and can deliver speeds of up to 510MB/s, which LaCie said is a 30 percent increase from the previous models.

The company also gave details on the new LaCie d2 Thunderbolt 3 storage solution, which it called "a great companion to limited-capacity SSD-based laptops and all-in-one computers." Specifically, LaCie mentioned that the accessory "performs great" on the new MacBook Pro line, and includes capacities up to 10TB with speeds up to 240MB/s, representing a 10 percent jump from the previous generation.

Featuring speeds of up to 240MB/s, a ten percent improvement over the previous generation, photographers can spend less time moving files from camera cards into Adobe Lightroom. Dual Thunderbolt 3 ports mean the user can daisy chain dual 4K displays, a single 5K display or up to six total LaCie d2 drives—all through a single cable connected to their computer.

It's even possible to power a compatible laptop such the latest MacBook Pro® through a USB-C port. That’s one less cable cluttering up the desktop. The LaCie d2 is also backed by a five-year limited warranty, the most generous in the industry.

4jasontv
What drive does LaCie put in their externals? I used to buy WD but they used the slower green drives. It ended being a better value to buy a shell from new egg with the ports I needed and a quality drive.
Score: 1 Votes (Like | Disagree)

FireArse
Nice picture there - time for a matching keyboard from Apple?
Score: 1 Votes (Like | Disagree)

Nice picture there - time for a matching keyboard from Apple?

I probably will grab a 2TB rugged drive. They seem to be one of the best out there even though seagate has bought LaCie.