In the wake of its legal dispute with Nokia, Apple has pulled all Withings-branded accessories from its online store and presumably from all of its retail stores around the world.

Apple appears to have pulled the accessories in the last day or two, eliminating Withings products like the Body Cardio Scale, the Smart Body Analyzer, and the Wireless Blood Pressure Monitor. When searching for these products on Apple's site, they are no longer listed as available for purchase.

Apple has stopped offering all Withings products because Withings is owned by Nokia following a spring 2016 purchase worth an estimated $192 million. The Withings brand has been integrated into Nokia's Digital Health unit and is led by Cedric Hutchings, formerly the CEO of Withings. 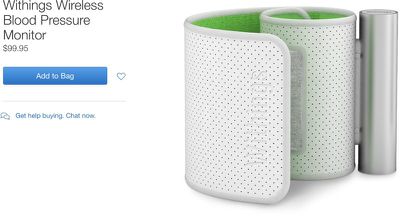 A cached version of the listing for the Withings Wireless Blood Pressure Monitor, no longer available from Apple.com
Earlier this week, Apple filed an antitrust lawsuit accusing Nokia and several patent assertion entities of illegally transferring patents to attempt to extort excessive royalty fees from the Cupertino company. Apple had established FRAND (Fair, Reasonable, and Non-Discriminatory) deals with Nokia, but by transferring patents to patent holding companies, additional royalties can be demanded.

According to Apple, Nokia has been conspiring with patent assertion entities (Acacia Research and Conversant Property Management) in an "illegal patent transfer scheme" to wring money out of Apple because Nokia's cell phone business is failing. Nokia, meanwhile, says that it has not been able to reach a licensing agreement with Apple and must defend its rights.

3pp
It's not petty. If a company is suing you, and doing it in the way described in this article, you are not going to devote space on your shelves, in your retail stores, to that company. Simple.
Score: 66 Votes (Like | Disagree)

Small White Car
So is it "petty" that Microsoft stores don't sell iPhones?

Is Disney wrong for not putting Shrek on its shelves?

All seems reasonable to me.


EDIT: Releasing an OS update that blocks them from working on with iPhones would be petty. Not selling them is totally different.
Score: 40 Votes (Like | Disagree)

kingofwale
not the first time Apple pull this crap. It's almost if the entire retail market is controlled by some with the maturity of highschool freshman
Score: 25 Votes (Like | Disagree)

tooltalk
I always thought this is something Jobs would have done. It seems this petulant 12-year old behavior is deeply ingrained in Apple's corporate culture.
Score: 23 Votes (Like | Disagree)

britboyj
Most companies tend not to enjoy funding lawsuits held against them... It's not about "throwing the toys out with the pram," it's about preventing conflicts of interest.
Score: 22 Votes (Like | Disagree)
Read All Comments

iPhone Exports From India Set to Double to $2.5 Billion YoY by March 2023