Every December, Apple provides its retail employees around the world with a special holiday gift to thank them for their contributions to the company and to celebrate the holiday season.

For 2016, Apple is giving each employee a T-shirt and a printed copy of the company's credo. The t-shirt is gray in color and features two circles created from what appears to be a list of all of the company's retail locations around the world. 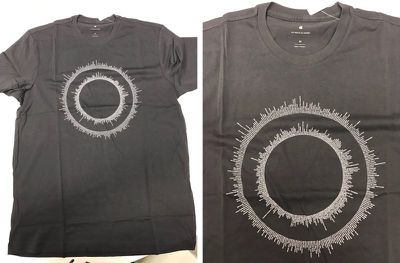 The credo is printed on a heavy card stock and comes in a protective envelope. Apple first introduced its new six-paragraph credo in August of 2016.

We are here to enrich lives.
To help dreamers become doers,
to help passion expand human potential,
to do the best work of our lives.

We give more than we take.
From the planet,
to the person beside us.
We become a place to belong
where everyone is welcome.
Everyone.

We draw strength from our differences.
From background and perspective
to collaboration and debate.
We are open.

We redefine expectations.
First for ourselves, then for the world.
Because we’re a little crazy.
Because "good enough" isn’t.
Because what we do says who we are.

We find courage.
To try and to fail,
to learn and to grow,
to figure out what’s next,
to imagine the unimaginable,
to do it all over again tomorrow.

We believe our soul is our people.
People who recognize themselves
in each other.
People who shine a spotlight
only to stand outside it.
People who work to leave this world better than they found it.
People who live to enrich lives.

Apple's employee gift this year is somewhat less impressive than the gifts that have been handed out in past years. In 2015, employees were given a set of black and red urBeats headphones from the Beats by Dr. Dre product lineup and a nine-month Apple Music subscription.

In 2014, employees received an Apple-branded Incase backpack, and gifts in the years before that have included things like blankets, water bottles, hoodies, free apps, discounted iTunes gift cards, and more.

duffman9000
I'm sure the Apple store employees would prefer a cash bonus instead of a $2 t-shirt.
Score: 159 Votes (Like | Disagree)

mousematt
Nauseating, meaningless, patronising corporate ******** of the very worst kind. How utterly soul-destroying for the staff.
Score: 135 Votes (Like | Disagree)

skippermonkey
We are here to enrich lives.
To help dreamers become doers,
to help passion expand human potential,
to do the best work of our lives.
But we simply can't be arsed to make a new Mac Pro
Score: 94 Votes (Like | Disagree)

Bryan Bowler
"We are here to entrench the world with dongles."
Score: 84 Votes (Like | Disagree)

Chupa Chupa
Hey, it's Apple's thinnest holiday gift yet. Does it come with an Ive narrated video too?
Score: 68 Votes (Like | Disagree)

Friday December 2, 2022 10:54 am PST by Juli Clover
Google is continuing on with its attempt to convince Apple to adopt the RCS messaging standard, publishing a new "it's time for RCS" blog post. Promoted heavily by Google, RCS or Rich Communication Services is a messaging standard that is designed to replace the current SMS messaging standard. It provides support for higher resolution photos and videos, audio messages, and bigger file sizes, ...
Read Full Article • 608 comments

Monday December 5, 2022 11:44 am PST by Juli Clover
Due to production issues at Apple supplier factories in China, the iPhone 14 Pro and iPhone 14 Pro Max are backordered and basically out of stock at every store. If you were planning to gift or receive an iPhone 14 Pro model for the holidays and didn't already get one, you're basically out of luck because they're gone until late December. Subscribe to the MacRumors YouTube channel for more ...
Read Full Article • 121 comments