Each year, Apple provides its employees with an exclusive Apple-branded holiday gift to thank them for their contributions to the company and to celebrate the holidays.

This year, Apple employees received an exclusive black Apple-branded Incase backpack that's similar to the Incase Staple Backpack. Incase's Staple Backpack, which has a slot for a MacBook along with several different pockets for accessories, typically retails for $59.99. Apple distributed the backpacks with an accompanying poem. 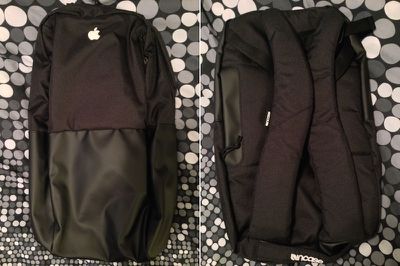 This is our gift to you.
But it can never compare to what you've given.

What does it take to give a gift?
It takes thoughtfulness. Compassion.
And sometimes, sacrifice of your time,
your talent, and your heart,

These are the gifts you give:
kindness, knowledge, humor, and patience.
You give them when you cover for a teammate,
so they can go on a much-deserved break.
When you send an email recognizing a job
well done. Or when you grab an extra coffee
for a friend before you clock in.

You give these gifts whether it's the beginning
of the season, or the end of a very long day.
You do it over, and over, and over again.

Amazing products are designed in Cupertino.
Amazing moments are made by you.
These moments are your gift this
holiday season -- to your customers,
to your team, and to the world.

As noted by 9to5Mac one of the Incase backpacks gifted to an Apple employee has already been listed on eBay and purchased for a buyout price of $99.99. In past years, Apple employees have received blankets, water bottles, hoodies, free apps, and more.

joecool99
that is so lame! company of this magnitude gives this junk - that they buy at $10 at most a piece in mass quantity. how about free iPhone/ipod touch or at least $300 gift certificate?

that rivals this article:
http://www.bbc.com/capital/story/20141205-the-worst-bonuses-ever
Score: 33 Votes (Like | Disagree)

And here, folks, is the problem with our society... an overbearing sense of entitlement...

Does Apple not also give great PAID working opportunities? Hmmm, guess not. Hey Apple, it's time to close your doors. You've let down JoeCool and the rest of us. Next year nobody will get anything. Happy now JoeCool?
Score: 26 Votes (Like | Disagree)

So you expect them to give something?! That's why employees are paid a salary funnily enough.

Having said that not only is the sentiment nice but they have around 85,000 full time employees which means that they have spent near on a million bucks (based on your $10 a bag) which they certainly didn't have to :rolleyes:
Score: 21 Votes (Like | Disagree)

Tiger8
Most big firms, like Apple, offer a year end bonus based on sales, performance, and meeting objectives.

Astounding sense of entitlement for employees to have to expect 300 bucks. It would be awesome if people just gave stuff away like that!

But I know what you mean... It's kind of belittling to get such a "gift". I would rather corporates don't give out gifts at all.

Oh well. Maybe one or two of them got some good use out of the back pack. Or sold them on ebay to make some money off it.
Score: 16 Votes (Like | Disagree)
Read All Comments