Apple recently updated its online refurbished store in the United States to include the sixth-generation iPod touch, offering discounts of $30 to $60 depending on model, which equates to savings of up to 16 percent. 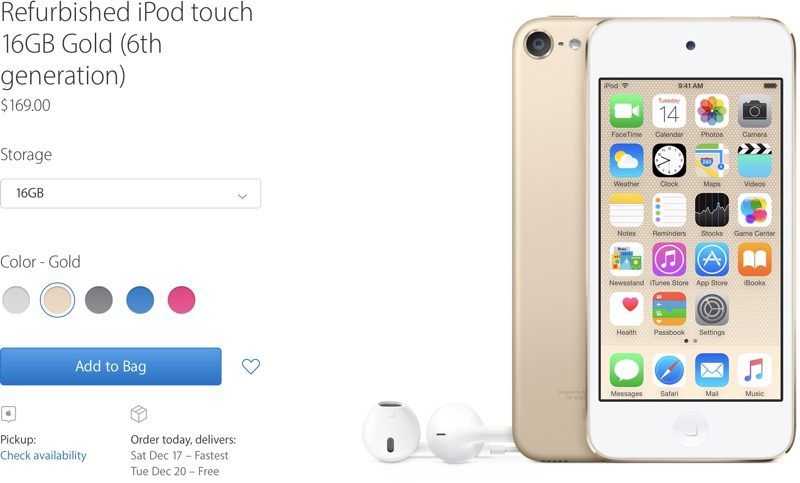 First introduced in July of 2015, the sixth-generation iPod touch features a 6.1mm thick body with a 4-inch display, an A8 chip, and an 8-megapixel iSight camera.

Though the sixth-generation iPod touch has been available for more than a year, it appears to be a new addition to Apple's online refurbished store in the U.S. All refurbished Apple iPods include a new battery and outer shell plus all accessories and a full one-year warranty.

Andres Cantu
Can't believe they were still selling the 5th generation one, an A5 device, in pretty much 2017 at those prices. Oh wait, actually, I can.
Rating: 5 Votes

Stella
Only $30 off for something that is old?
Rating: 4 Votes

oneMadRssn
I prefer to think of it as the iPad Nano.
Rating: 2 Votes

Uhh. No. Apple's refurbished process is less likely to experience issues than a new device, aside from all the hardware that is replaced.

Also, it still has a warranty intact and you save some money. Not to mention, the iPod new is still over priced with its current capabilities when comparing to what the iPhone SE would cost new in the box.


Uhh. No. you have zero data to support the idea that refurb products experience lower failure rates than new products.

and no, nothing i said is wrong. refurb deals are nothing special and can easily be beaten elsewhere for a new product. and actually, none of your points have anything to do with anything i said.
Rating: 1 Votes
[ Read All Comments ]