Apple has held talks with SoftBank about investing up to $1 billion in the Japanese telecommunication giant's global technology fund, according to The Wall Street Journal. A deal has not been finalized, while the current status of the talks could not be determined, according to the report. 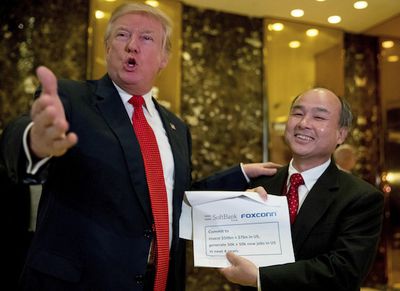 President-elect Donald Trump and Softbank CEO Masayoshi Son (Image: LA Times)
The so-called "SoftBank Vision Fund," expected to launch next year, will be valued at up to $100 billion, which will be invested into emerging technologies like artificial intelligence and connected internet devices. SoftBank itself will invest at least $25 billion in the fund, while the Saudi Arabian government will pledge up to $45 billion.

Apple's own investment would allow it to gain insight on emerging technologies, according to the report.

Such a move also would reflect a shift in Apple’s investment strategy, which until recently focused on small stakes in young technology companies. Earlier this year, Apple invested $1 billion in Didi Chuxing Technology Co., China’s homegrown ride-sharing competitor to Uber Technologies Inc. SoftBank is also an investor in Didi.

Last week, SoftBank CEO Masayoshi Son said he would invest $50 billion of the fund in the United States and create 50,000 new jobs in the country following a meeting with President-elect Donald Trump. SoftBank is the parent company of U.S. carrier Sprint, which employs about 30,000 people.

If you like Trump or not, you cannot argue that more jobs in America are a bad thing.

Not sure what this has to do with Trump?

He just seems to be hanging off the coattails of the work of other people.
Score: 6 Votes (Like | Disagree)

Apart from the fact this has been in the pipeline for months.

mozumder
This fund was announced back in October: http://www.wsj.com/articles/softbank-group-launches-investment-fund-1476398189

Thank you President Obama for bringing jobs and investment into America!

If you like Trump or not, you cannot argue that more jobs in America are a bad thing.

That's why I was asking, I want to hear from the Trump haters why this is a bad thing because I know they will spin it negatively.
Score: 4 Votes (Like | Disagree)

Nr123*123
This is uuuuuge. Makes me want to grab something. Uuuge deal in making in America great again.

Apart from the fact this has been in the pipeline for months.
Score: 4 Votes (Like | Disagree)
Read All Comments

Monday November 28, 2022 10:42 am PST by Juli Clover
Apple has cut back on its Twitter advertising, according to Twitter CEO Elon Musk. In a tweet, Musk said that Apple has "mostly stopped" its Twitter ads, asking if Apple hates "free speech." Musk went on to publish a poll asking if Apple should "publish all censorship actions" taken that impact customers and he began retweeting content from companies that Apple has had moderation discussions ...
Read Full Article • 1391 comments