Apple design chief Jony Ive and longtime collaborator Marc Newson's take on the London hotel Claridge's Christmas tree has been revealed – and perhaps not surprisingly, there's not a bauble in sight. 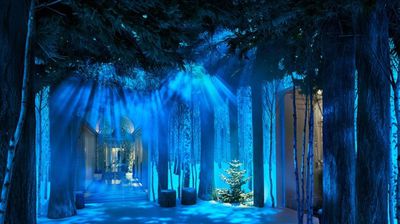 Mayfair's landmark festive tree has been drawing crowds since 2009, when notable designers began creating the seasonal decoration each year. But Ive and Newson's interpretation takes the tradition to another level – albeit a minimalist one – by transforming the hotel's lobby into a natural grove of unadorned birch trees as part of a living light and sound installation. The designers had this to say:

Our aim was to create an all-enveloping magical experience that celebrates our enormous respect for tradition while recognising our excitement about the future and things to come. There are few things more pure and beautiful than nature, so that was our starting point, layering various iterations of organic forms with technology.

Design and style magazine Wallpaper described a scene in which a series of vast four meter-high light boxes line the walls, illuminating black-and-white images of snow-capped silver birch trees, against which "towering cast models of Scots pine rise to a canopy of natural green pine".

The accompanying forest soundscape begins with a dawn chorus and features owls, nightingales, sparrows, and foxes. Synced to the audio is specially choreographed lighting that cycles from sunrise to nighttime, creating a dappled effect in the installation space. At the center of the grove, a smaller sapling tree appears to grow in the transitions of light, which the designers describe as a symbol of the future.

The installation is open to the public and free to enter, and will remain in London's Claridge's hotel throughout the festive season.

saudor
Must say.. They did an awesome job hiding all the dongles needed to power all of that.
Score: 29 Votes (Like | Disagree)

Because Jonny is too busy designing Christmas trees to be worried about updating the Mac line of products?


People seem to have this mistaken notion that Ive exists solely to design Apple products and nothing else.
Score: 17 Votes (Like | Disagree)

Dilster3k
I'm surprised Sir Jony didn't go with this instead 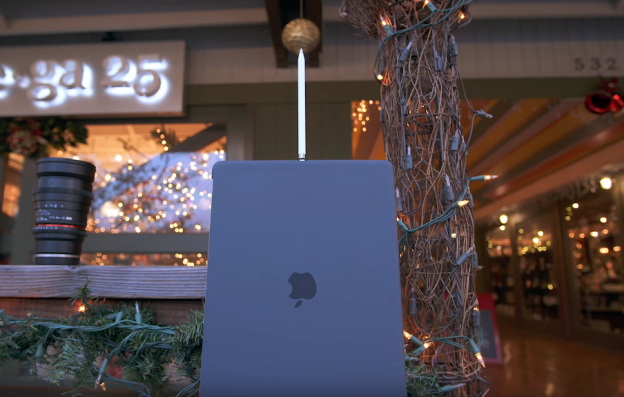 Scottsoapbox
If only Ivy pit the same effort into his designs that he puts into describing them...
Score: 13 Votes (Like | Disagree)

(Braces for next wave of utterly inane criticism and trolling).

On a side note, why is this in the Mac blog?

Because Jonny is too busy designing Christmas trees to be worried about updating the Mac line of products?
Score: 13 Votes (Like | Disagree)
Read All Comments

Friday January 21, 2022 3:21 am PST by Sami Fathi
Apple will no longer include EarPods with every iPhone sold in France, starting on January 24, according to a notice posted by a French carrier (via iGeneration). Apple was previously required to include EarPods in the box with the iPhone due to a French law that required every smartphone sold in the country to come with a "handsfree kit," but the law has now been changed in favor of reducing the ...
Read Full Article • 157 comments