Building on its stated aim of helping users find the right music for any moment, Google says the fresh take on its streaming service is "smarter, easier to use, and much more assistive", thanks in large part to deeper integration with machine learning technology that allows it to offer content based on user location, time of day, current activity, and music preferences. 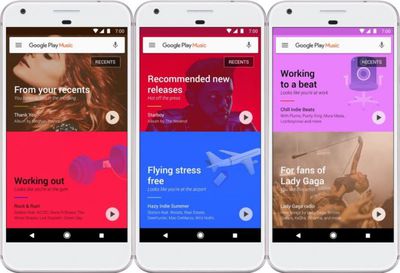 Central to the overhaul is a redesigned home screen that Google likens to "the ultimate personal DJ", which learns what you like to listen to and when you like to listen to it, presenting content accordingly. Examples include suggesting a users' workout playlist when they arrive at the gym, offering music for unwinding after a day at the office, and recommending additional songs from new artists the user has previously expressed an interest in.

To provide even richer music recommendations based on Google's understanding of your world, we've plugged into the contextual tools that power Google products. When you opt in, we'll deliver personalized music based on where you are and why you are listening — relaxing at home, powering through at work, commuting, flying, exploring new cities, heading out on the town, and everything in between. Your workout music is front and center as you walk into the gym, a sunset soundtrack appears just as the sky goes pink, and tunes for focusing turn up at the library.

In addition to the new opt-in personalization features, the overhauled service also includes a new regularly updated offline playlist based on what users listened to recently, enabling subscribers to listen to their favorite music even if they lose their connection.

Powered by the company's machine learning systems and teams of human curators, Google promises the experience will "keep evolving" and improve the more it's used, whether that's through the company's recently launched Google Home smart speaker, on Chromecast devices such as the new 4K Chromecast Ultra, or its Google Pixel smartphones, which were unveiled last month.

The price of Google Play Music remains $9.99 per month and the company says it's rolling out the revamped service globally this week across iOS, Android, and the web.

Yeah I want google to spy on everything I do more..! No thanks!

You will have to come out of your cave at some point.
Just how good do you think any AI system can ever be for you, or anyone, when you keep everything secret from it?
Exactly like expecting a stranger in the street, who knows nothing about you, being of any use to you.
That's not reality.

Does a boss at work, keep every single thing secret from his or her assistant as they are worried the assistant will be telling everyone else, would not be much use as an assistant then!

Turnpike
Both Google and Apple are trying too hard to force too many features into the simple act of listening to music. Can I just buy a few songs and have them on an easy to use player interface please...? PLEEEAASSE....?
Score: 12 Votes (Like | Disagree)

Building on its stated aim of helping users find the right music for any moment, Google says ('https://blog.google/products/google-play/introducing-the-new-google-play-music/') the fresh take on its streaming service is "smarter, easier to use, and much more assistive", thanks in large part to deeper integration with machine learning technology that allows it to offer content based on user location, time of day, current activity, and music preferences.

Oh, boy, Sounds like more homogenization of music tastes. Heaven forbid there be listeners that:

* Are more interested in music from outside their own little corner of the globe.
* Do not work the standard M-F 8-5 job -- and therefore have a different idea of "morning" "midday" "bedtime" and even "weekend".
* Like to rest and chill with heavy metal, but work out to smooth jazz.
* Have tastes that are completely contrary to what some marketroid thinks is "the popular music in this metropolitan area".

I've tried the curated playlists, AI playlists, etc of music services, and you know what? A tweaked iTunes DJ (a feature that is no longer in the program's current version) generally gives me a "radio station" that I enjoy more.
Score: 11 Votes (Like | Disagree)

Aussi3
Yeah I want google to spy on everything I do more..! No thanks!
Score: 10 Votes (Like | Disagree)

Yeah I want google to spy on everything I do more..! No thanks!

Oh, boy, Sounds like more homogenization of music tastes. Heaven forbid there be listeners that...

Everything SeaFox said and still no EQ on IOS.

Both Google and Apple are trying too hard to force too many features into the simple act of listening to music. Can I just buy a few songs and have them on an easy to use player interface please...? PLEEEAASSE....?

Ugh, can't anybody pick their own **** anymore? Why does everything need to be "curated"? Technology is awesome, but it doesn't have to replace every basic human functionality...

Theres a huge difference between AI enriching my life and AI as a tool to monetise my personal data and make it a company's core business.

I swear to Jeebus. Reading comprehension is severely lacking in this thread. Either the quotes above are from people who didn't read the article or seriously didn't understand what they read. It's an OPT-IN option. It's not mandatory, it's not on by default. It takes a conscious decision to choose to use the feature. If someone chooses the feature that means they obviously see it as a value add.

For those of us with common sense, we realize we can continue doing what we've been doing and the feature doesn't affect us at all. I use GPM on a family plan. This feature doesn't appeal to me so I'm not going to opt in. See how easy that is?:rolleyes:
Score: 8 Votes (Like | Disagree)

The app does look much cleaner than Apple Music though.

Thursday September 29, 2022 12:38 pm PDT by Juli Clover
Tony Blevins, Apple's vice president of procurement, is set to depart the company after he made a crude comment about his profession in a recent TikTok video, reports Bloomberg. Blevins was in a video by TikTok creator Daniel Mac, who was doing a series on the jobs of people he spotted with expensive cars. After seeing Blevins in an expensive Mercedes-Benz SLR McLaren, Mac asked Blevins what ...
Read Full Article • 496 comments