Apple over the past two days has started approving Mac App Store apps that have been updated with Touch Bar support on the new MacBook Pro. 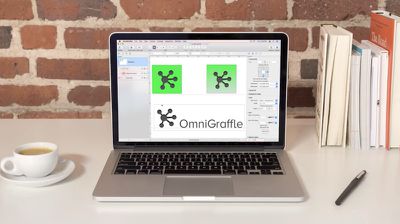 One of the first Touch Bar apps is OmniGraffle 7, a popular vector drawing tool for designing graphics and diagrams. After updating to version 7.2, users will have access to text controls when editing labels, for example, or manipulation controls when working with shapes. Without anything selected on the canvas on the main screen, the Touch Bar can be used to add shape, a stencil, or an image.

OmniGraffle 7.2 for Mac's new Touch Bar controls
Speed-Up, a utility for speeding up or slowing down audio playback directly in iTunes, also saw its Touch Bar update approved earlier today. Other apps that now support the Touch Bar include Gestimer, Opus One, Disk Aid, and Memory Clean 2, and several more popular apps will be updated over the coming days and weeks. Those interested can track Mac app updates on our sister site AppShopper.

The Touch Bar is a narrow strip of glass above the keyboard that provides both system and app-specific controls based on what you are doing. The touchscreen sits in place of the standard row of function keys on the new MacBook Pro and includes Touch ID for faster logins and Apple Pay. Learn more by reading our Touch Bar hands-on roundup and Apple executive Craig Federighi's interview about the Touch Bar.

I hope they make the touchbar open for all kind usage, at least when the app comes from outside the App Store. It's up to the user to avoid nasty apps.

I can imagine MacKeeper flashing the touchbar saying your computer has virus; please put your finger (touch ID) to enable protection!
Score: 7 Votes (Like | Disagree)

But you know what would make it look even nicer? If it were placed one row above my escape and function keys.

If there isn't a System Preferences option to keep esc/fn keys always displayed by default, I'm sad to say I'll be done with Apple. And even if there is, I'm still not sure I can, or should, adapt.

I'm considering the Razer Blade Pro, but that ridiculous placement of the up-arrow key is probably a deal-breaker. It's a real shame no one makes a laptop as nice as the late-2011 17" MacBook Pro, or an OS as great as OS X Snow Leopard.
Score: 5 Votes (Like | Disagree)

Just curious, would Apple let a developer put an ad on the bar?

DocMultimedia
Just curious, would Apple let a developer put an ad on the bar?
Score: 2 Votes (Like | Disagree)

What if that ridiculously large trackpad is because it will support Apple Pencil next year? Remove the headphone jack and add a lightning port and it makes perfect sense to me. What do you guys think?

That does not make sense. Especially lightning port..
And its seen as a audio jack, not headphone jack, to many use it for regular pc speakers.

I think its bigger chance apple come up with a way to use ipad pro as a wacom tablet for mac. That would be awesome
[doublepost=1478845689][/doublepost]

The touch bar is looking nice!

But you know what would make it look even nicer? If it were placed one row above my escape and function keys.

If there isn't a System Preferences option to keep esc/fn keys always displayed by default, I'm sad to say I'll be done with Apple. And even if there is, I'm still not sure I can, or should, adapt.

I'm considering the Razer Blade Pro, but that ridiculous placement of the up-arrow key is probably a deal-breaker. It's a real shame no one makes a laptop as nice as the late-2011 17" MacBook Pro, or an OS as great as OS X Snow Leopard.

You know there is a hidden escape button thats physical and always there no matter what touchbar is showing? On left side its a butten same as the touch id button..