One of the headline features of Apple's new MacBook Pros is the Touch Bar, a Multi-Touch-enabled strip of glass above the keyboard that provides instant access to tools and commands that change contextually based on the app you are using or system task you are carrying out. It also has Touch ID built in. 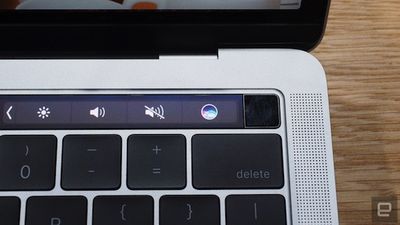 Siri and Touch ID (Image: AOL)
The all-new Touch Bar replaces the standard row of function keys on the new MacBook Pros, with system controls like an escape key, power, volume, and brightness still accessible at times. The middle part of the Touch Bar is the Control Strip, which changes automatically based on what you are doing.

Apple provided the media with an opportunity to demo the new Touch Bar following its "Hello Again" event earlier today, and a number of websites have now published early hands-on looks at the new feature. Read ahead for a roundup of Touch Bar first impressions alongside photos of it in action.

Image: Dieter Bohn/The Verge
Dieter Bohn at The Verge noted the Touch Bar has a matte finish, which gives the on-screen controls a little more of a physical feel:

What you might not have gathered from the keynote is that it has a matte finish, which makes the buttons on it somehow feel a little more physical. It’s bright, but not so bright that it distracts — it seems to be about on par with the brightness of the backlit keyboard.

Bohn added that the Touch Bar controls can be rearranged, while you can long-press on buttons to get to functions faster. Tapping and holding on Reply, for example, allows you to slide your finger over to Reply All. There is no haptic feedback when tapping controls, but Bohn said the Touch Bar worked accurately.

Brian Heater at TechCrunch said the Touch Bar is "glossy" but "not quite slick," making it "frictionless enough so as to run a finger across with little effort."

The new Touch Bar is essentially a secondary Retina display that Heater described as "quick and responsive" during his demo:

It’s quick and responsive, reacting to multi-touch and the amount of pressure the user applies. It also adapts quite quickly as you toggle between different apps. It’s a really cool and really versatile new addition – like having a small mobile display embedded directly into the Notebook.

While the Touch Bar is mostly grayscale, it has some color. When using apps such as Messages, for example, you can access a row of frequently used emojis.

Image: Brian Heater/TechCrunch
Michael Gorman at Engadget said Touch ID on the Touch Bar is "considerably faster than typing in a password" to unlock your Mac:

Plus at the right edge of that strip lies a Touch ID sensor, that allows folks to login to their Macs via their fingertips. In the limited time I spent with the new Pro, that sensor worked as it should -- which is to say considerably faster than typing in a password.

Ina Fried at Recode said the Touch Bar "looks like the kind of thing that those who spend all day on a laptop will grow to really love."

FromTheWild
FFS Emojis? is that really what the pro line up has come too??
Been a reader of Mac Rumours for years and years, I've have read through comments often but never had the inclination to comment. So flipping disappointed with this today, was looking at upgrading my 2013 Macbook pro in Jan...why remove Magsafe? I'm very used to paying the extortionate apple tax but why so little so ***** expensive, doesn't make any sense!
Score: 44 Votes (Like | Disagree)

prasand
There should be a physical esc key in the same position as the touch ID on the other side, moving the esc key over for the sake of visual balance was a poor design choice. The esc key is one of the most used keys.
Score: 25 Votes (Like | Disagree)

This product release screams short term strategy to retain profitability without considering the long-term implications of pricing beyond reach a significant proportion of current mac owners.
Score: 17 Votes (Like | Disagree)

talkybear
Touch bar very much looks like Apple's last resistance to a full touch screen, and watching the demo is like watching people typing on physical keyboards and resisting on-screen keyboards from the days of the first iPhone...
Score: 16 Votes (Like | Disagree)