Apple today seeded a minor version change to iOS 10.1.1, the current version of the iOS 10 operating system. The update is minor enough that it did not warrant a full 10.x.x number change, but it does include an updated build number. 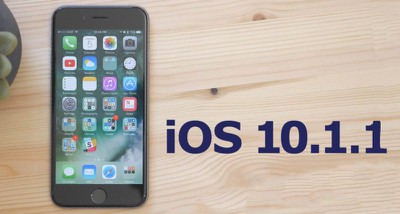 There is no new information in the changelog for the updated build, so it is unclear what minor bug fixes or changes it brings.

The first version of iOS 10.1.1 fixed a bug that caused Health data to be unavailable for some users. A minor update, iOS 10.1.1 was released shortly after iOS 10.1, a more significant update that brought a new "Portrait" mode and dozens of bug fixes and feature improvements.

This most likely fixes the problem for users that do not have a screen lock passcode after updating to 10.1.1 being presented a requirement to enter their 4-digit screen lock passcode when they didn't have one set. This has hit two elderly people I know (one with iPhone 5 and one with 5c). It pretty much requires a DFU and a restore from iCloud/iTunes backup to get back running.

I'm gonna bet that they're just old and weren't reading the prompts.
Score: 7 Votes (Like | Disagree)

C DM
At least some information from Apple about it would be nice. No version bump yet the build number is higher by 50.
Score: 5 Votes (Like | Disagree)

Eh what? So another week and another iOS update with the same version number as last weeks but you can't get it over the air... what??.?.

Uhh because you are not required to update to it. It probably fixes a hiccup in the installation process like 9.2.1 did when they re-released it. If you are on 10.1.1 and everything is working fine, you literally have nothing to worry about and can ignore this.
[doublepost=1478720132][/doublepost]

Still not seeing the update for my 6s. Is it just for the 7? Anyone update on an older phone?

Its not OTA, its iTunes only and its only meant for those still on 10.1. Don't worry about it.
Score: 4 Votes (Like | Disagree)