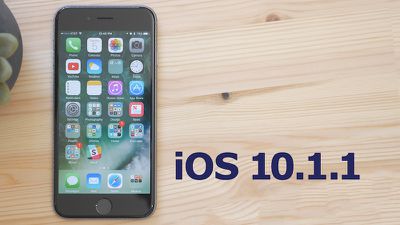 Today's update fixes bugs including an issue where Health data could not be viewed for some users. iOS 10.1.1 can be downloaded as a free over-the-air update on all iPhone, iPad, and iPod touch models compatible with iOS 10.

iOS 10 is a major update that includes features like a redesigned Lock screen experience, a revamped Messages app with a full App Store, a Siri SDK for developers, new looks and features for Maps and Apple Music, and tons more. Make sure to check out our iOS 10 roundup for details.

Update: Apple has subsequently stopped signing iOS 10.0.2 and iOS 10.0.3, meaning that users can no longer downgrade to those software versions.

Ghost31
Doesn't it seem like apple has so many bug updates lately? I feel like im on my ps4 and every update is to increase stability.

Does this address the lack of snappiness in safari? Serious question. Ever since the last update, my ipad's safari doesn't load certain pages like even macrumors and i have to keep refreshing until it "just works"
Score: 11 Votes (Like | Disagree)

I didn't know Health data went missing. Anything else? Self-preservation?

I lost it in 10.1B3. But Apple was convinced it was user error. Lost over a years worth of data. Had to start over. Really POd that they are now admitting fault. Both iCloud backup and iTunes encrypted backup failed to recover lost data due to this bug.
Score: 6 Votes (Like | Disagree)

jayducharme
I haven't lost any health data, but the Health app itself seems like a lost cause in iOS 10. I can't understand why Apple revised the app to make it more difficult to view your stats. It's now a three-step process, when before all I had to do was simply launch the app.
Score: 6 Votes (Like | Disagree)

As someone pointed out earlier in the thread, there is only one more update than last year. Remove 10.0.3 because that is iPhone 7 only, then you have the same amount of updates as of last year. You really think Steve Jobs was part of software development? Come on now, don't be ridiculous. Additional, 10.1 was a feature update, not strictly a bug fix. Every version of iOS gets a X.1.

Because there are multiple updates does not mean there are quality control issues. Most of the updates are for security fixes so they then included bug fixes as well. Why update just for a security fix if they can also include additional updates that have already been completed.

I would hardly saw software is declining from Apple. There are millions and millions of more people using their software than 5 years ago. Therefore, more bugs are likely to be discovered which in result would lead to more bug fixes. Its actually quite that simple.

Steve Jobs had his hand in all areas of the company, and yes that included software as well as hardware. I never said he was "part" of software development, he was CEO of the damn company and he was interested/involved in every part of the company including software, so your comment is totally off base.

When Apple bungled the release of MobileMe many years ago, that was SOFTWARE and Jobs chopped heads. He didn't accept crap (bad quality) from anyone. Here is an excerpt from Business Insider about how Jobs handled the MobileMe fiasco.

Jobs' reaction to MobileMe is legendary thanks to Adam Lashinsky's reporting. Jobs gathered the MobileMe team in Apple's auditorium, and according to Lashinsky, said ('http://www.businessinsider.com/steve-jobs-mobileme-failure-2011-5'), "You've tarnished Apple's reputation ... You should hate each other for having let each other down."

He then replaced the leader of MobileMe on the spot. The clear implication: Do your job, do it well, or you will be fired.

Your comment about trying to leave out version 10.0.3 because that update was for the iPhone 7 is ridiculous, it was yet another version of IOS 10.

Five updated versions of IOS 10 in less than seven weeks since the release of IOS 10 ... that is pathetic.
Score: 5 Votes (Like | Disagree)
Read All Comments