Following the launch of the new MacBook Pro with four Thunderbolt 3 ports, LaCie has introduced its new lineup of Thunderbolt 3 storage solutions: the Bolt3 desktop drive and the enterprise-class 6big and 12big RAIDs. 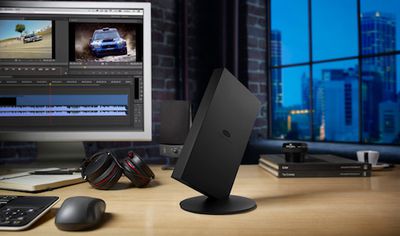 LaCie's new Bolt3 desktop drive with Thunderbolt 3
LaCie's Bolt3 combines dual Thunderbolt 3 ports with a pair of the latest M.2 PCIe SSDs, striped together into a 2TB volume, to create the "world's fastest desktop drive," with speeds up to 2800MB/s for 4K-6K video editing.

That kind of speed slashes time off nearly every task in your post-production workflow. Ingest RAW footage from RED® or Blackmagic® cinema cameras in a fraction of the time. Transcode 4/5/6K footage much faster using Adobe® Premiere® Pro or DaVinci Resolve. Then transfer a terabyte of footage from the Bolt3 to RAID storage—such as the LaCie 12big Thunderbolt 3—in minutes instead of hours.

Thunderbolt 3 permits daisy chaining and provides twice the video bandwidth of any other cable, meaning you can daisy chain one USB-C or up to five Thunderbolt 3 devices, or connect dual 4K displays, through a single USB-C cable.

The Bolt3 is designed with an aluminum enclosure featuring a magnetic cable door and display stand to place it upright on a desktop. Included in the box is a Thunderbolt 3/USB-C cable, power supply, cleaning cloth, and quick install guide.

The trio of storage solutions will be available at LaCie resellers this quarter.

LaCie's Bolt3 combines dual Thunderbolt 3 ports with a pair of the latest M.2 PCIe SSDs, striped together into a 2TB volume, to create the "world's fastest desktop drive," with speeds up to 2800MB/s for 4K-6K video editing.

OldSchoolMacGuy
Too bad LaCie has the highest rate of drive failure on the market. I'd never trust my data with them unless you're looking to pay a recovery company big money.

And everyone thought Apple's 2TB cost was bad! $2k for 2TB!?

For 2TB M.2 PCIe, it's definitely a premium, but it's not that outrageous.
Score: 4 Votes (Like | Disagree)

Don't they just use Seagate or WD drives? So it would be the HD manufacturer that fails then?…

Lacie indeed just uses Seagate. That is the whole problem. It's the Snapchat of harddrives.
Score: 2 Votes (Like | Disagree)
Read All Comments