As the Apple Watch Nike+ begins making its way to pre-order customers today, a few users have taken to Reddit and Twitter to share some unboxing pictures and videos of the new device.

Continuing in the vein of the Apple Watch Sport aluminum models, the Nike+ comes in a long, rectangular package, but inside of a black box instead of a white one. Underneath the cover of the box, the typical "Designed by Apple in California" phrase has been replaced with "Designed for athletes by Apple and Nike."

The rest of the packaging appears largely similar to the traditional style of Apple Watch. The Apple Watch Nike+ itself includes a few exclusive watch faces for users of the device to take advantage of in order to enhance their daily running habits, and the watch works in tandem with the newly-updated Nike+ Run Club iOS app. With the updated app, Apple Watch Nike+ wearers can use Series 2's onboard GPS to keep track of their runs within Run Club, and even stream Apple Music in the app.

Some pre-order customers are also starting to share the Nike+ Watch on their wrists, and one user on Reddit explained a few of the customization options available for the exclusive watch faces. For the face in the image below, Redditor kisstherobot said that the color can be changed to white (image quality appears to have slightly altered what is supposed to be light green), and the text can be "filled, outlined, or a mix of both."

In one of the few videos available online of an Apple Watch Nike+ unboxing, Twitter user @Gielk can be seen opening the new Apple Watch and briefly examining the Black/Volt version of the Nike Sport Band.

Apple Watch Nike+ has launched in 41 countries today, including the United States, United Kingdom, Canada, and Mexico, and the rollout will continue with 7 new countries tomorrow and Israel on Sunday. In a press release shared earlier in the week, Apple also confirmed that the new Nike+ bands will not be sold separately, and can only be obtained by purchasing an Apple Watch Nike+ collection.

For those interested, the collections start at $369 for 38mm and go up to $399 for 42mm, and can be purchased from Apple.com, Nike.com, Apple retail stores, "select" Nike retail stores, and some department stores including Macy's and DICK'S Sporting Goods.

Wore my stainless series zero for a marathon running the workout app and throughout the day after and went to bed with 20% charge. Maybe you're just running too slow?
Score: 9 Votes (Like | Disagree)

Aslevik
I got mine yesterday. Everything looks great, but the Nike+ RunClub-app on the watch is in Chinese. And I can't figure out how to change it. My iPhone language is NOT set to Chinese.. 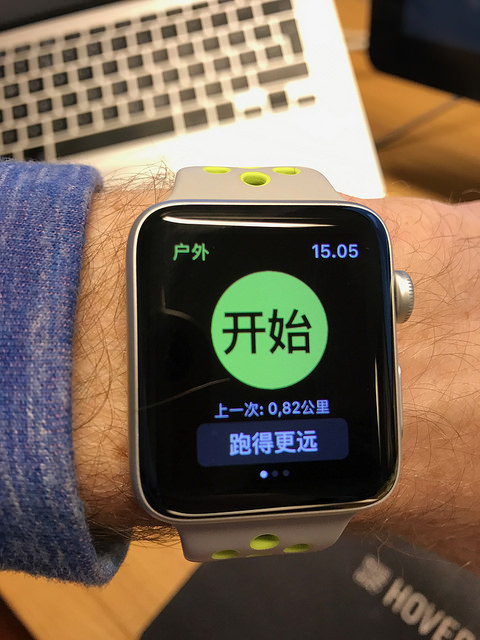 Zenithal
Oh, I know. There was a bit of tongue in cheek humor in my post. Except I just noticed I said "made a killing in the Balkans." Not one of my wisely chosen words.
Score: 4 Votes (Like | Disagree)

lincolntran
What watch? I only see a kick butt keyboard.
Score: 3 Votes (Like | Disagree)

So other than the slick band, there's not anything here that you personally wouldn't have gotten with a standard S2. I still don't believe that the Nike watch is marketed to serious runners like yourself. Doesn't mean serious runners won't want it for other reasons ... after all, serious runners probably do all the other things that non-runners that have Apple watches do too.

Absolutely true. I only purchased the Nike branded version because of the band. That said, I’m purchasing my first Apple Watch due to the platofrm (finally) having GPS and being able to be used as a serious data gathering tool for the first time.

So you have a great point there.

The nice thing about all of this is the Nike branded version is otherwise exactly they same as the standard S2, and doesn’t cost even a penny more.
Score: 3 Votes (Like | Disagree)
Read All Comments