Though the new MacBook Pro models equipped with a Touch Bar won't be in the hands of consumers for at least two more weeks, Apple today updated many of its Mac apps with support for the feature. 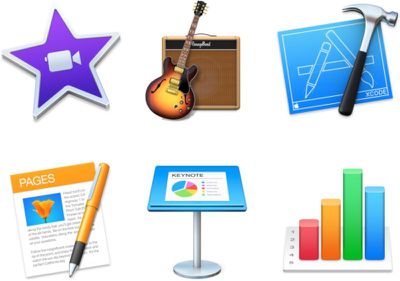 In Numbers, Pages, and Keynote, the Touch Bar can be used to edit text, shapes, tables, and charts, providing quick-access tools depending on what you're working on.

In iMovie, the Touch Bar allows users to quickly add video clips to a movie, or use them to create picture in picture, green screen, and split screen effects. There are also options for using the Touch Bar to play a movie, split a clip, or adjust clip volume.

In GarageBand, the Touch Bar can be used to adjust all Smart Controls on a selected track, adjust volume, or to fine-tune the sound of instruments and effects.

Apple has also released a new version of iTunes, iTunes 12.5.2. The update is not yet available for download and it may be limited to new MacBook Pro models, introducing support for the Touch Bar.

Over the course of the next few weeks, many popular Mac apps from third-party developers will also be updated to support the new Touch Bar in the MacBook Pro. Some apps that will have Touch Bar buttons include Pixelmator, Affinity Photo, Photoshop, Sketch, DaVinci Resolve, Microsoft Office, and more.

Update: iTunes 12.5.2 is now available through Software Update for all compatible devices.

Anybody else stuck like this? It shows five updates available up top, but nothing else and no way to install the updates.

Happened to me too so I just went to the Purchased tab and clicked Update near the iWork apps.
Score: 5 Votes (Like | Disagree)

Icaras
So every creative app from Apple got updated with Touchbar support except for Logic Pro X?

Weaselboy
Anybody else stuck like this? It shows five updates available up top, but nothing else and no way to install the updates.

So every creative app from Apple got updated with Touchbar support except for Logic Pro X?

If Apple let it burn, they'll give me the last excuse to totally ditch everything of theirs.
Score: 5 Votes (Like | Disagree)

Anybody else stuck like this? It shows five updates available up top, but nothing else and no way to install the updates.

I got that, but switched to the Purchased section, and updated each app there. All good now, playing with Motion and FCPX later... :D

Happened to me too so I just went to the Purchased tab and clicked Update near the iWork apps.

I got that, but switched to the Purchased section, and updated each app there. All good now, playing with Motion and FCPX later... :D

Thanks to you both. That seems to be working fine. :)
Score: 2 Votes (Like | Disagree)
Read All Comments