Designed by French designer Philippe Starck, the Mi Mix is a 6.4-inch device that features a 2040x1080 pixel, 17:9 aspect ratio borderless display that takes up 91.3 percent of the front of the handset. The only significant bezel sits at the bottom of the screen, but it doesn't have a physical button, with all the controls existing onscreen. 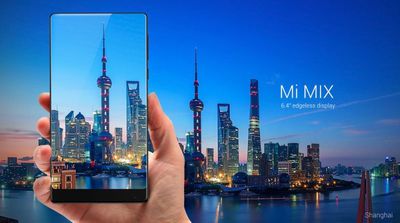 The all-ceramic phone uses a piezoelectric ceramic driver for the earpiece which uses the metal frame to generate sound, while the proximity sensor has been replaced by ultrasound. Both innovations are hidden under the display. The design also uses a mortise and tenon joint for attaching the display to the body, rather than glue or other adhesives.

Powering the phone is a Qualcomm Snapdragon 821 processor, with 4GB RAM for the 128GB capacity model and 6GB RAM for the 256GB model, which also features gold trim, with 18K gold accents on the camera lens and fingerprint sensor on the back.

The rear camera boasts a 16-megapixel resolution and 4K video, while the front camera is 5 megapixels. The phone is also said to have dual SIM connectivity and a 4,400mAh battery with Qualcomm Quick Charge 3.0 support.

The phone may give us some idea of what Apple's next phone could look like. Apple has a major iPhone redesign planned for 2017, with a glass body and edge-to-edge OLED display that includes an integrated Touch ID fingerprint sensor and front-facing camera. The handset is expected to lack bezels, meaning there will be no Home button. Jony Ive is said to have wanted to introduce an iPhone that looks like a single sheet of glass for several years, and 2017 may be the year that becomes possible.

Apple will test and release products when they're ready.
Score: 45 Votes (Like | Disagree)

Just like the Mi 5 that bends easily when you apply a little force?

Sorry, but I've got to correct you here.

"Concept phone" roughly translates to "can't blame us if this thing doesn't work".

Apple will test and release products when they're ready.

"Junk" company? Dude, they're like the Apple of China.

I see no point in shelling out close to a thousand dollars for flagship devices due to the influx of great devices from Xiaomi and Oppo that cost half.
Score: 27 Votes (Like | Disagree)

"Concept phone" roughly translates to "can't blame us if this thing doesn't work".

Apple will test and release products when they're ready.

Amacfa
Looks beautiful. Although the quality of their phones are terrible, plus it runs android.