Duet Display, the app that allows you to turn your iPad into an extra display for your Mac, is today gaining new features designed to turn the iPad Pro into a high-performance graphics tablet able to compete with Intuos or Wacom drawing tablets.

The new "Duet Pro" capabilities allow Duet Display to support the Apple Pencil on a 12.9 or 9.7-inch iPad Pro, allowing users to draw directly on their iPads and have the result show up on a connected desktop app. 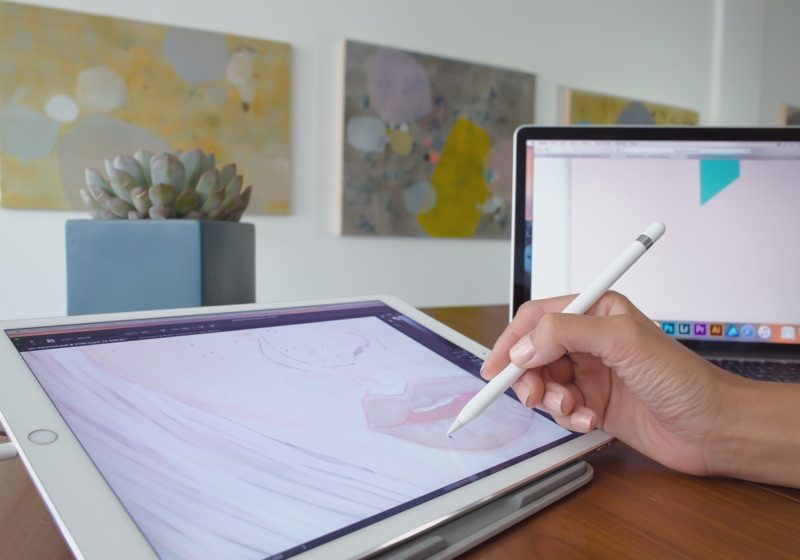 Duet Display is also being updated with new algorithms to make drawing more responsive and to allow for better color quality and color correction. Features like palm rejection and hover functionality are included.

Duet Pro will be available as part of a subscription tier that's priced at $20 per year for both new and existing customers.

Duet Display can be downloaded from the App Store for $9.99, a temporary discount. [Direct Link]

WilliamG
Why can't users buy that functionality? $20 a year to rent it? Certainly lost me...
Rating: 12 Votes

Appleaker
Apple should have a built in Duet function for iPad Pros.
Rating: 11 Votes

Why can't users buy that functionality? $20 a month to rent it? Certainly lost me...


I can't stand subscription apps; I'd rather buy something as opposed to have reoccurring bills for all eternity.
Rating: 11 Votes

Ya I think that makes a lot of sense and agree. But the reason they can create such a high quality product is because they have additional resources to hire the best talent to continue improving it.

It is hard to maintain and update such a sophisticated app for a one time purchase which is why no one has done it yet.


HUH?!?! Adobe did this for more than 20-years. They switched over to to subscription because they knew they would make more money, a lot more money...not to better develop their software. Listen to every single user and they will say that Adobe apps have suffered since they switched.

Developers make more money by developing better software and offering the upgrades at a lower price to people that update than the new clients.


It's not a "tight ass" thing in so far as that we are all getting subscription fatigue mainly. If you start adding things up, it becomes a daunting amount of "per month" for everything.

I'm happy to pay year over year - But not as a subscription. I want to own the current copy and be able to choose for myself if the yearly upgrade is compelling enough to justify more money.
Rating: 6 Votes

We have a ton of future improvements, upgrades, and new features we are working on, and want to resource for that. It's a sophisticated product that requires constant updates.

And honestly, I think subscription is far better for the customer. Instead of the one time large purchase, we have to continuously earn your business, so we will focus on making the product better instead of marketing to new customers.
Rating: 6 Votes


Some people have things called "budgets," where they set aside only a specific amount of money every week/month/year for the things they want. They buy a new computer or tablet every few years, not every release.

Owning a $1,000 tablet does not mean one has money to burn. It could simply mean one is frugal in other ways in order to get the things that they want.

More to the point, Duet Display is a decent app, but I'm not paying an annual subscription for pencil functionality. It's neither responsive enough nor high resolution enough to be worth paying for over and over again. A 13" Cintque has greater performance for less than the cost of a Pro+Pencil+Duet.
Rating: 5 Votes

kingtj
I agree. I got all excited to hear Duet Display was adding this feature, but then I saw the subscription part.

The whole industry is trying to become a big wad of services. Pretty soon, it'll get where you may as well rent your PC or Mac while you're at it, because everything you do with it will be on some kind of monthly or annual membership fee.

I agree with someone else who said "Software should be a product, not a service." When it ceases to be a product, quality always drops. Office 365 is a great example. Ever since Microsoft rolled that out, we've been collectively stuck with a series of Office apps that removed a bunch of features that used to be in them (supposedly for the sake of making one version for all platforms with identical features and menus, one of these days). Excel 2016 for Mac, especially, is a buggy pile of junk now. We've got spreadsheets it simply can't handle without randomly crashing on them, and we have to keep Excel 2011 installed in parallel with it to work with them.

Why can't users buy that functionality? $20 a year to rent it? Certainly lost me...

HUH?!?! Adobe did this for more than 20-years. They switched over to to subscription because they knew they would make more money, a lot more money...not to better develop their software. Listen to every single user and they will say that Adobe apps have suffered since they switched.

Developers make more money by developing better software and offering the upgrades at a lower price to people that update than the new clients.


You just defined product and service along your own arbitrary lines. Try again.

Are you seriously comparing the two?