Angela Ahrendts, Apple's Senior Vice President of Retail, was the opening speaker for Fortune's annual Most Powerful Women Summit, speaking a little about the next-generation Apple retail stores, her vision for Apple's physical presence and more.


Ahrendts started the evening by talking about her background and how Apple CEO Tim Cook recruited her, mentioning that she originally tried to convince Cook she wasn't right for the job. Ahrendts said that her big pitch for Apple was to integrate Apple's retail and online stores and turn the company's physical prescence into a bigger part of the communities they operate it. Cook, much to her surprise, loved the idea.

She said that she believes that "the bigger the company, the bigger the obligation" of that company to do something other than rake in profits. One of the things on her agenda was education, so Ahrendts planned on a next-generation of Apple retail stores that could function as something more than retail stores.

The new next-generation store designs are the culmination of that vision, featuring a town square concept that's focused less on selling things and more on enriching lives. She notes that the retail side of the company tries to hire candidates based on their empathy and compassion so that they can enrich lives rather than salesmanship. For instance, Apple wants to teach kids things they can't learn in school, which is why the retail stores will start hosting Swift programming lessons for kids, teachers, and parents.

The lessons, which are currently available for teachers at Apple Union Square in San Francisco, will slowly roll out to next-generation stores by next year. Kids, teachers, and parents will be able to attend Apple retail stores and learn to code for free three times a day. Currently, Apple provides educational camps for kids during the summer.

Another driving force behind the next-generation stores was making the retail spaces represent the products better. "How do we make it so the best of Apple can come together in one place?" Ahrendts said they asked as they designed the new stores. Their solution was to map out everything people did on their devices and integrate them into the stores, which meant a larger focus on the liberal arts. 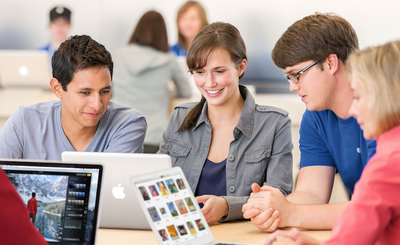 Ahrendts said that she's always been in a believer of Steve Jobs' "technology married with the liberal arts" philosophy, and that she wanted to increase the presence of liberal arts in the stores. She explained the new Creative Pro position at Apple retail locations is the liberal arts equivalent of the Genius, and that the two are equal in terms of importance. Creative Pros are supposed to help you figure out what to do with your Apple product, which could range from photography lessons to coding to learning how to make movies or music.

Another way of integrating the liberal arts with the retail stores is turning the stores into community centers. "On the weekend you'll see an artist sketching things or a guy playing a guitar," Ahrendts said. The goal is to help foster human experiences that draw people out of their digital bubbles. The town square concept also extends to naming. The accessory-laden "avenues" represent avenues bordering a town square, while the giant screens are called "forums" because they act as a hub for many activities.

Finally, Ahrendts said she considers the retail store the biggest product Apple has. Employee retention is also strong, with Ahrendts saying they have an 87 percent retention rate, better than the average retail retention rate of 20 percent. The company plans to have 95 next-generation Apple stores open by the end of the year.

Ahrendts has been the head of Apple's retail efforts since 2014, when she left her job as CEO of Burberry to join the Cupertino company. Earlier this month, Ahrendts had her title shortened from Senior Vice President of Retail and Online Stores to just Senior Vice President of Retail, reflecting Apple's new vision of tightly integrating its online and retail efforts. Similarly, Apple dropped the "Stores" from Apple store branding in August, reflecting a more singular experience as well as Apple's efforts to turn the store into more than retail outfit.

I've only had poor experiences at Apple stores since she took over. Next!

So your saying, Angela Ahrendts is the reason every one of your Apple Store visits has been "Poor experiences." Feel free to elaborate on how she has affected your experience and contrived to your anecdotal Dismay.

My visits to my Apple Stores and other Apple Stores around the country for that matter, have been excellent under her reign. Helpful staff, courteous and most of all, assertive in the right areas to answer My questions or concerns. Maybe I should commemorate Angela for providing an experience where I will and want to return in the future.
Score: 19 Votes (Like | Disagree)

miniyou64
I can only imagine if they had a most powerful men summit...
Score: 17 Votes (Like | Disagree)

Black Belt
Considering they sadly haven't updated their computers in years I suppose it has to change their focus from products!

Here's an idea - how about they focus on making insanely great products for a change. The store look should be a hobby.
Score: 16 Votes (Like | Disagree)

Ahrendts started the evening by talking about her background and how Apple CEO Tim Cook ('https://www.macrumors.com/roundup/tim-cook/') recruited her, mentioning that she originally tried to convince Cook she wasn't right for the job.

Here's an idea - how about they focus on making insanely great products for a change.

That era has passed.

Besides Apple hasn't the time or funding or ambition...

Posing, Posturing and Pontificating are the "Three P's" that thrills Apple today.
Score: 15 Votes (Like | Disagree)

Ahrendts started the evening by talking about her background and how Apple CEO Tim Cook recruited her, mentioning that she originally tried to convince Cook she wasn't right for the job. Ahrendts said that her big pitch for Apple was to integrate Apple's retail and online stores and turn the company's physical prescence into a bigger part of the communities they operate it. Cook, much to her surprise, loved the idea.

So lemme get this straight: she didn't think she was right for the job but had a "big pitch" ready to land it anyway. And why would she be surprised he liked her big idea? Do people normally pitch ideas they expect will be turned down? What would be the point? To prove yourself wrong? All this coming from a person who was clearly very experienced at corporate climbing given her previous position. Right. What a bunch of self-serving twaddle! It all sounds very much like Julius Caesar refusing the crown three times (http://www.enotes.com/homework-help/why-did-julius-caesar-refuse-crown-thrice-534422).

She said that she believes that "the bigger the company, the bigger the obligation" of that company to do something other than rake in profits.

And yet all Apple does is continue to find new and exciting ways to rake in even more profits by squeezing suppliers (https://www.macrumors.com/2016/08/19/taiwan-refuse-lower-quotes-iphone-7-parts/), making it impossible to install less-expensive upgrades (https://www.macrumors.com/2014/10/20/mac-mini-2014-teardown/) to their computers, keep playing fast and loose with tax laws (http://appleinsider.com/articles/16/10/17/apple-moves-9b-worth-of-itunes-intellectual-property-to-ireland), continue to sell old components at premium prices (https://buyersguide.macrumors.com/#Mac), etc. So they got the "rake in profits" part of the equation, so where is the "do something other than" part?

She notes that the retail side of the company tries to hire candidates based on their empathy and compassion so that they can enrich lives rather than salesmanship.

What's this mean? Sales reps who feel sorry for you because you're being ripping off with non-upgradeable, overpriced, older tech?

For instance, Apple wants to teach kids things they can't learn in school, which is why the retail stores will start hosting Swift programming lessons for kids, teachers, and parents.

Ah, so teaching kids a programming language that veers them towards Apple products is a selfless act to "enrich their lives", not a cynical ploy to recuit future generations into their eco-system. It's because the future is all about software and computers. I see. Does anyone really buy this? If they were really interested in teaching people skills that will truly enrich their lives--and be about more than just raking in profits--they should offer courses on how to balance and live within a budget or how to cook, for example, skills sorely lacking nowadays that could actually make a (positive) difference in someone's life.

Apple is a corporation whose sole purpose is to make money, just like any other company. I have no problem with that, nor with Angela Ahrendts' career. I do, however, take issue with the ever-increasing loads of corporate b_llshit we're fed. Stop trying to make things out to be other than what they are. Stick to making products consumers want to buy and services they like to use. Cut the crap and concentrate on reality instead.