It's a change that appears to have started rolling out with the launch of the newer Apple Stores, like the Union Square location in San Francisco. Apple has always referred to that store as just Apple Union Square, and over the course of the last few days, the company has updated all of its retail store webpages to remove the "Store" branding. What was once "Apple Store, Fifth Avenue," for example, is now just "Apple Fifth Avenue." 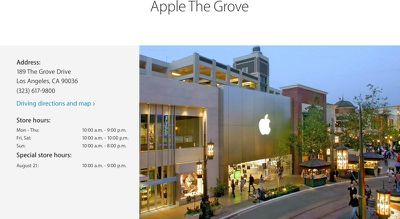 The new website for The Grove Apple Store
An archived page for the Fifth Avenue Apple Store has the older branding as of August 12, suggesting this is a fairly recent change to Apple's retail plan.

The old website for The Grove Apple Store
Apple also recently sent out a memo to its retail employees, letting them know that the "Store" branding is gradually being dropped from both retail locations and online. While Apple told employees the change will be gradual and will start with new stores, pages for almost all stores have been updated to remove the "Store" titling.

The decision to remove the "Store" portion of Apple's line of retail locations likely has to do with efforts to turn newer stores into more than just simple stores, positioning them as gathering places for their communities. Apple Union Square, for example, features an outdoor plaza with regular acoustic performances and a 6K video wall with seating called "The Forum," aimed at allowing artists, photographers, and musicians to inspire and educate customers through year-round programs, events, and classes.

Sirious
They managed to make the names of their retail stores thinner!
Score: 48 Votes (Like | Disagree)

soulreaver99
Can't innovate anymore my ass! This is revolutionary!
Score: 46 Votes (Like | Disagree)

neilpatel2009
Next they will drop the mac line.
Score: 33 Votes (Like | Disagree)

Fuchal
It'll always be the Apple Store to me.
Score: 20 Votes (Like | Disagree)

djcerla
Makes a ton of sense.

1) no confusion with the App Store
2) it's no longer only a store; definitions are important
3) "Apple, the experience", vs. "Apple's commercial front-end"
4) it's shorter > more elegant
Score: 19 Votes (Like | Disagree)
Read All Comments

Thursday January 26, 2023 6:30 am PST by Tim Hardwick
The new Mac Pro coming later this year is expected to feature the same spacious modular design as the 2019 model, but with fresh concerns over its lack of upgradeability surfacing, some users are beginning to wonder what the transition away from Intel architecture actually means for Apple's most powerful Mac. The current Intel Mac Pro that Apple sells is popular with creative professionals...
Read Full Article • 495 comments