Apple CEO Tim Cook drew cheers from a Salt Lake City audience on Friday as he reiterated the company's unwavering commitment to encryption and privacy protections for its customers, according to local media reports.

The comments were made during a Q&A session at the yearly meeting of the Utah Technology Council (UTC), a trade and advocacy group representing more than 5,000 technology and life-sciences companies across the U.S. state. The 55-year-old CEO was invited along with Utah senator Orrin Hatch to take the stage at the Grand America Hotel and field questions from a public audience. 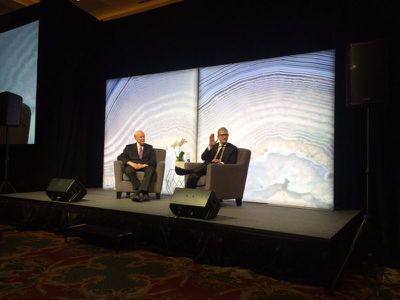 Tim Cook in Q&A with senator Orrin Hatch
Calling encryption "one of the biggest issues we face," the CEO noted that most iPhone users have more personal data on their phones than in their homes. "Encryption is one of the things that makes the public safe," he said. "We feel we have a responsibility to protect our customers."


"We believe the only way to protect both your privacy and safety from a cyberattack is to encrypt," Cook told about 1,400 industry executives, tech workers and Apple fans. "We throw all of ourselves into this and are very much standing on principle in this."

Cook was responding to questions regarding the lingering impact of Apple's dispute with the FBI over the agency's demand that it build a "back door" into its software, following the use of a locked iPhone by the primary suspect in the San Bernardino mass shooting last December.

Apple refused to comply with the request from the federal agency, which dropped its pursuit of the company when investigators apparently discovered another way to retrieve the data on the suspect's phone.

During the Q&A session, Cook also talked up the emerging field of augmented reality and underscored the importance of digital photo technology in preserving personal memories, which led him onto the subject of Apple's co-founder, Cook's late friend and colleague, Steve Jobs.

The CEO spoke fondly of keeping the former chairman's office intact at the company's Cupertino campus in California, where Jobs' personal knickknacks remain in place five years after his death from pancreatic cancer at the age of 56.

"His spirit will always be the DNA of the company," said Cook. "Jobs' vision was to make the best products that enrich people's lives. Lots of things will change with Apple, but that will never change."

REALLY ... then how about eliminating the iMessage Ping logs after one day.

Data like that is pretty important for software developers when trying to diagnose and fix bugs. Deleting after 30 days is a pretty reasonable standard.


Of course that doesn't prevent people who have no clue about that process from bitching and moaning based on the headlines.
Score: 21 Votes (Like | Disagree)

REALLY ... then how about eliminating the iMessage Ping logs after one day.
Score: 14 Votes (Like | Disagree)

Such a "mistake" does not happen at random. And it is not the only one:
http://www.forbes.com/sites/andygreenberg/2014/02/24/former-apple-security-engineer-to-apple-fix-your-sh-t/ ('http://www.forbes.com/sites/andygreenberg/2014/02/24/former-apple-security-engineer-to-apple-fix-your-sh-t/')

i'm going to bet that you don't write software. because yes, mistakes in complex software projects happen. all the time, every day.

the hater mindset is so nuts. how you believe that the same company that very publicly stood up to the fbi over encryption is now conspiring to make your local itunes backups weaker is anyone's guest. it's a form of paranoia.
[doublepost=1475332211][/doublepost]

I do not know what your feelings (hate) have to do with the obvious weaknesses in Apple devices and software.

what obvious weaknesses? iOS is more secure than android. it's encrypted by default while android is not. that speaks for itself.
Score: 14 Votes (Like | Disagree)

justperry
Shame people never dare to ask the right questions, actually, I think they do but won't get through.
Score: 9 Votes (Like | Disagree)

all the hater nitpicking in the world won't change the fact that ios is more encrypted and safer than android.
Score: 8 Votes (Like | Disagree)

...We looked into it, and found out that the new mechanism skips certain security checks, allowing us to try passwords approximately 2500 times faster compared to the old mechanism used in iOS 9 and older....