Norway-based company Opera Software has brought its VPN feature to the masses with the release of Opera 40 desktop browser for Mac.

For those unfamiliar with the technology, a VPN creates an encrypted tunnel from the user's computer to the VPN server, which hides browsing activity from other users on the local network and enhances security and privacy online. It shields a user's real IP address, allowing them to bypass firewalls, block tracking cookies, and access geo-restricted content regardless of their true location. 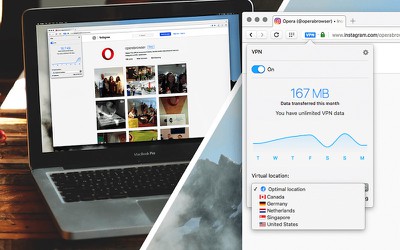 "If people knew how the internet truly works, I believe they all would use a VPN," said Krystian Kolondra, SVP of Opera browser for desktops, in a blog post. "By making our browser VPN free and easy to use, we hope to make it an essential tool, just as the lock and key is to your house."

We know that people are concerned about their privacy online and that the interest for VPN is increasing. However, two major obstacles are blocking people from using it: VPNs are too complicated to use, and they require a monthly subscription. Opera resolves both issues by introducing its free and easy-to-use service right into the browser.

Opera's VPN supports AES-256 encryption and auto-selects the best server to route users' traffic through, based on speed, latency, and traffic congestion. Currently the service has server locations in the U.S., Canada, Germany, Singapore, and the Netherlands.

VPNs typically come in the form of separate plug-ins or client apps, making Opera one the first major browsers to include one as standard. The feature comes after the company's acquisition of U.S. VPN company SurfEasy last March. Opera has been testing the VPN in developer betas since April, and says that neither it nor SurfEasy logs any information about a user's browsing history.

The Norwegian firm is on the verge of a $600 million deal with a Chinese consortium which will transfer ownership of its apps to a group that includes anti-virus company Qihoo 360.

Northgrove
This is now a Chinese browser. I'm so conflicted over it because it was finally becoming good again after the Chromium reboot. Storing my user credentials and using VPN's with some Chinese product? I'm just using Vivaldi now. I don't have a good feeling about this at all.
Score: 4 Votes (Like | Disagree)

needfx
and selling their portfolio to China really tops up that safe feeling
Score: 4 Votes (Like | Disagree)

cloudyo
The exit point of the vpn is controlled by opera I assume. That means that they could intercept and log all traffic from their server to the destination website.

I would rephrase the comment in the article like this:
If people truly knew how a vpn worked, they would think harder about who the operator of the vpn is and what they can do.
Score: 3 Votes (Like | Disagree)

LOL! An example of a security oxymoron right here...
Score: 3 Votes (Like | Disagree)

mejsric
Safari should have this features also.
Score: 3 Votes (Like | Disagree)
Read All Comments

Friday January 15, 2021 1:46 pm PST by Juli Clover
Apple has started "early work" on an iPhone that has a foldable display, according to a new report from Bloomberg's Mark Gurman. Though testing of a foldable iPhone has begun, Apple has not committed to releasing a device that has a foldable display. Development has not yet expanded beyond a display and Apple does not have full foldable iPhone prototypes in its labs. Like foldable...
Read Full Article • 212 comments

Friday January 15, 2021 6:17 am PST by Hartley Charlton
Incoming Intel CEO Pat Gelsinger has said that the company must "deliver better products" than Apple, which he described as a "lifestyle company," and says that Intel's best days are "in front of it" (via The Oregonian). Speaking at an Intel all-hands meeting yesterday, Gelsinger derisively implied that Apple is merely a "lifestyle company," so Intel must be able to surpass its technology: ...
Read Full Article • 319 comments

Friday January 15, 2021 10:23 am PST by Juli Clover
Apple is developing two versions of the Mac Pro to succeed the Mac Pro that was first released in December 2019, according to a new report from Bloomberg. The first updated Mac Pro is a direct successor to the current Mac Pro and it will use the same design. It may also be equipped with Intel processors rather than Apple silicon chips, and it could be one of the sole machines in the Mac...
Read Full Article • 245 comments