A VPN creates an encrypted tunnel from the user's computer to the VPN server, hiding browsing activity from other users on the local network and enhancing security and privacy online. A VPN shields a user's real IP address, allowing them to bypass firewalls, block tracking cookies, and access geo-restricted content regardless of their true location. 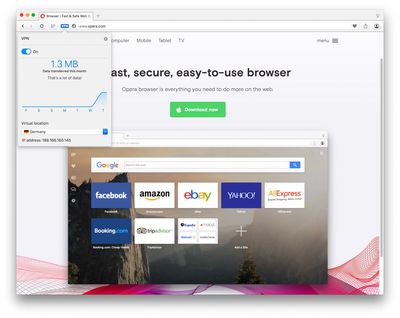 VPNs usually come in the form of separate plug-ins or apps that require a paid subscription, making Opera one the first major browsers to include one as standard. The launch of the feature comes after Opera's acquisition of U.S. VPN company SurfEasy last March.

Currently Opera's built-in VPN allows users to choose virtual locations in the US, Canada, and Germany. Opera says more countries will be available when the feature makes it to the stable public release of the browser.


Mac users can download Opera 38 developer release and give the free, unlimited VPN a try. After installation, simply click "Opera" in the menu bar, select "Preferences" and toggle the VPN switch on.

According to Global Web Index, more than half a billion people (24 percent of the world’s online population) have tried or are currently using VPN services. According to the research, the primary reasons people use a VPN are for better access to entertainment content, browser anonymity, and the ability to access sites restricted by their workplace or country.

In January, Netflix began blocking users who try to bypass country-based content restrictions by using a VPN. Canadian subscribers to the streaming service appear to have been the latest targets of the crackdown after VPN-tunnelled users in the country began seeing error messages on their screens over the weekend when trying to access the service's much larger U.S. catalogue of movies and TV series.

This should make it really convenient for the FBI/NSA to gather all your browsing data with just one request. Or perhaps they already have direct feed.

And why are you this paranoid about the law, presuming you are not doing something illegal?

Read the book "Three Felonies a Day" (or even just the summary) and selective enforcement and you'll have a better understanding of the issues.
Score: 4 Votes (Like | Disagree)

This should make it really convenient for the FBI/NSA to gather all your browsing data with just one request. Or perhaps they already have direct feed.

I'm not sure what a VPN has to do with anything above. You must think the above is not possible w/o a VPN. With or w/o a VPN web traffic is still flowing through an ISP. A VPN protects you a little better from amateur snoopers when you are using public wi-fi. That's all.
Score: 3 Votes (Like | Disagree)

qtrim
This should make it really convenient for the FBI/NSA to gather all your browsing data with just one request. Or perhaps they already have direct feed.
Score: 2 Votes (Like | Disagree)

OneMike
This is good in a way. There are legitimate uses for a VPN. I use this at times for testing outside of the network
Score: 2 Votes (Like | Disagree)

CmdrLaForge
Hey thats great news. I will definitely try this. Hope it is fast and easy to setup.
Score: 1 Votes (Like | Disagree)
Read All Comments