A spot check of Apple's reservation system for iPhone Upgrade Program members reveals iPhone 7 Plus availability is slowly improving in the United States.

iPhone 7 Plus models in select storage capacities and colors, sans Jet Black models, are available for reservation at select Apple retail stores in California, Florida, New York, and some other states as of the time this article was published. iPhone 7 models continue to be more widely available. 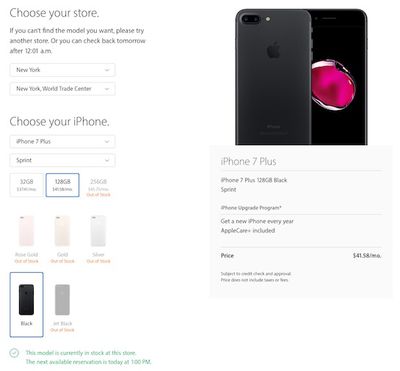 iPhone 7 Plus reservations are available at six other Apple stores in New York City, including its Grand Central, SoHo, Upper East Side, Upper West Side, West 14th Street, and World Trade Center locations. Each location has iPhone 7 Plus models for all four major U.S. carriers, aside from T-Mobile models at Apple SoHo.

iPhone 7 Plus reservations in Florida are available at Aventura Mall in Aventura, St. Johns Town Center in Jacksonville, and International Plaza in Tampa Bay.

iPhone 7 Plus stock both in stores and online has been limited compared to iPhone 7 since last Friday's launch. New data suggests the 5.5-inch model has outsold the 4.7-inch version for the first time ever, likely fueled by exclusive features such as dual cameras, longer battery life, and 3GB of RAM.

Yesterday, it was reported that some Jet Black iPhone 7 Plus pre-orders will be delivered sooner than expected as shipping estimates improve.

after seeing how Apple treated its upgrade members.

You mean apologetically and desperately trying to resolve the issue?

The upgrade program certainly wasn't smooth sailing. But Apple have been doing their best to try and rectify the problems. I'm sure next year will be much better for those in the upgrade program.
Score: 17 Votes (Like | Disagree)

Funny they took down the phone number on the upgrade webpage. Guess Apple does not care about loyal customers. How far down hill Apple has gone since Steve Jobs died. Tim does not impress me. He allowed this awful launch to happen. Steve Jobs would have had the head or heads of those responsible to get canned.

Wow... join date today, first post. I think you've pretty much hit most of the Apple-hater points. You're off the mark on a few parts, though.

You forgot to mention the lack of Mac updates. Classic mistake; the Mac line is one of the easiest targets. Surely you can do better. Also, you've got to space out the slew of criticism every now and then with a bit of a pun. Referring to the CEO as "Tim Crook" is a solid choice around here. How about a clever remark like "you're upgrading it wrong?" for future articles about the IUP's hiccups.

Overall, 2/10 effort - but I'm sure you'll do much better in the future. I'm practically on the edge of my seat, in lip-biting anticipation, to see your next well-argued and objective comments about the state of Apple.
Score: 15 Votes (Like | Disagree)

btrach144
I don't think I'll ever sign up for Apple's upgrade program after seeing how Apple treated its upgrade members.
Score: 9 Votes (Like | Disagree)

leesweet
They worked like crazy fixing the problems. They added stock to the IUP available inventory, invented a new call center team pretty much on the weekend, and then had phones reserved for many members in stores on launch day marked with their names (if available, JB was still a problem, of course). I walked in, got mine on Sunday and was out in 20 minutes, new loan all set up.

I do hope we can do it all online next year and return the old unit through the mail as the contract allows. That would leave the stores for those that have to have the store experience!
Score: 6 Votes (Like | Disagree)

I don't think I'll ever sign up for Apple's upgrade program after seeing how Apple treated its upgrade members.

I picked up my 256 GB black 7 plus yesterday, thanks to the upgrade program. No complaints here.
Score: 3 Votes (Like | Disagree)

That's an idea.
But I'm afraid it would be a 96 months program and you would be eligible for an upgrade after 48 months, when a new Macbook is released.
Score: 3 Votes (Like | Disagree)
Read All Comments