Jackson shared the news at Climate Week in New York City, where she also shared some details on Apple's recent environmental progress. In 2015, 93 percent of Apple's worldwide operations were powered with renewable energy, and in the U.S., China, and 21 other countries, Apple uses renewable energy for 100 percent of its operations. 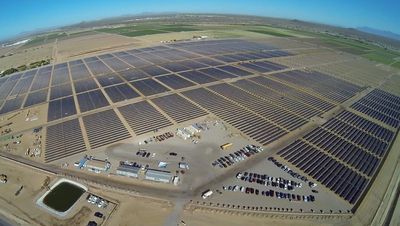 Jackson also gave an update on Apple's commitment to helping its suppliers use renewable energy, announcing that Apple supplier Solvay Specialty Polymers, which makes the antenna bands used in the iPhone, has pledged to use 100 percent renewable energy for all Apple production.

Catcher Technology, a supplier that provides aluminum enclosures for iOS and Mac devices, is also aiming to reach 100 percent renewable energy by the end of 2018.

"Apple is committed to running on 100 percent renewable energy, and we're happy to stand beside other companies that are working toward the same effort," said Jackson. "We're excited to share the industry-leading work we've been doing to drive renewable energy into the manufacturing supply chain, and look forward to partnering with RE100 to advocate for clean-energy policies around the world."

Other major companies who are members of RE100 include IKEA, Adobe, BMW, Coca Cola, GM, Google, HP, Microsoft, Nike, Philips, Starbucks, and Walmart.

When it comes to the environment: "We're a green company with a conscience, and if you don't like it, get out of the stock."

When it comes to taxes: "We have a fiduciary responsibility to our shareholders to use every tax avoidance (which is legal) loophole possible."

Porco
The quicker and more widespread the move to renewable energy the better. This is an area Apple can genuinely help change the world for the better.

And I think it's both ethically and economically the right direction to go in, those things do not have to be mutually exclusive.
Score: 6 Votes (Like | Disagree)

okboy
When it comes to the environment: "We're a green company with a conscience, and if you don't like it, get out of the stock."

When it comes to taxes: "We have a fiduciary responsibility to our shareholders to use every tax evasion loophole possible."
Score: 5 Votes (Like | Disagree)

Now, how can we turn this into something negative

That photo explains why it's called Green Energy ... because it uses up so much land.
Score: 4 Votes (Like | Disagree)

dwaltwhit
From a financial standpoint this is a positive both short and long term. Short term has the Benefits of PR. Long term is the investment in infrastructure that leads to vastly reduced overhead in the years to come.
Score: 2 Votes (Like | Disagree)
Read All Comments