While iFixit was busy tearing down the iPhone 7 Plus, the experts at Chipworks opened up an iPhone 7 to take a close look at the chips included on the device's logic board.

The new A10 Fusion chip at the heart of the iPhone 7 is the most significant feature to be examined, with Chipworks noting the chip is indeed manufactured by TSMC with a die size of roughly 125 square millimeters. The iPhone 7 is also confirmed to include 2 GB of memory, compared to the 3 GB found on the iPhone 7 Plus. 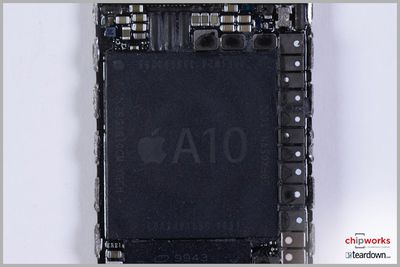 The A10 is also extremely thin, due in large part to the InFO packaging technique used by TSMC which was seen as a major factor in TSMC winning exclusivity for A10 production.

[W]hatever node is being used, the A10 processor is incredibly thin, giving credibility to the reports that TSMC’s InFO packaging technique is being used.

The A10 sits below the Samsung K3RG1G10CM 2-GB LPDDR4 memory. This is similar to the low power mobile DRAM as the one we found in the iPhone 6s. Looking at the X-rays we see the four dies are not stacked, but are spread out across the package. This arrangement keeps the overall package height to a minimum. Assembled in a package-on-package assembly with the A10 InFO packaging technique reduces the total height of PoP significantly.

On the cellular modem side, Chipworks found an Intel part that is likely the XMM7360, paired with two SMARTi 5 RF transceiver chips and a power management chip also from Intel.

As we previously noted, Apple is producing two different models of both the iPhone 7 and 7 Plus, with models for AT&T and T-Mobile users not including support for CDMA networks. This is apparently a result of a modem supplier split between Intel and Qualcomm, with Intel's current chips unable to support CDMA networks due to licensing issues. iPhone 7 and 7 Plus models with Qualcomm modems can support both GSM and CDMA networks.

Finally, Chipworks notes that flash storage for the iPhone 7 is also being at least dual-sourced, with Hynix and Toshiba chips being found in its two teardown phones.

For the rest of the details on the chips found in the iPhone 7, check out Chipworks' full rundown.

Update: Chipworks has confirmed the A10 Fusion chip is still made on TSMC's 16 nm FinFET+ process and has shared an annotated die shot of the chip.

jiggad369
Amazing how far and ahead Apple is in the chip architecture in the mobile world and yet all you have is people complaining about the headphone jack...
Score: 46 Votes (Like | Disagree)

Amazing how far and ahead Apple is in the chip architecture in the mobile world and yet all you have is people complaining about the headphone jack...

To all those "courage" bashers:

nfl46
2GB of ram? Blah. That's nothing. My Android has 6GB of ram. That automatically means its better! /s
Score: 24 Votes (Like | Disagree)

Amazing how far and ahead Apple is in the chip architecture in the mobile world and yet all you have is people complaining about the headphone jack...

The A10 is an absolutely fantastic SoC. But we're starting to hit the law of dminishing returns for mobile phone CPU performance. An A9 to A10 is not likely going to yield significantly large performance gains in everyday life because the A9 itself was already blazingly fast. when your App load times for most normal apps is in the miliseconds, a 10% increase isn't going to be really noticed.

Take away the most commonly used port in the world for audio, and people are going to notice.

So no, it's not amazing that the focus is on a functionality removal, and not an incremental update thats not going to be noticed by most.
Score: 19 Votes (Like | Disagree)

Not everyone wants a 5.5 iPhone just because it has 3 GB of Ram. 2GB is still adequate for some iPhone users.
Score: 18 Votes (Like | Disagree)

To all those "courage" bashers:

Wow, do I miss him. Hope you're in a better place, Steve.
Score: 15 Votes (Like | Disagree)
Read All Comments

Saturday May 21, 2022 9:00 am PDT by Hartley Charlton
With around four months to go before Apple is expected to unveil the iPhone 14 lineup, the overwhelming majority of rumors related to the new devices so far have focused on the iPhone 14 Pro, rather than the standard iPhone 14 – leading to questions about how different the iPhone 14 will actually be from its predecessor, the iPhone 13. The iPhone 14 Pro and iPhone 14 Pro Max are expected...
Read Full Article • 289 comments