Pre-order supplies of the iPhone 7 and the iPhone 7 Plus are starting to dwindle, with several of the new iPhone models now displaying shipping estimates ranging into November. Pre-orders began at 12:01 a.m. Pacific Time on Friday, September 9, and it took less than 20 minutes for supplies of popular models to begin selling out.

Models in the new Black and Jet Black colors are the most heavily affected in the United States. Jet Black iPhone 7 Plus devices were initially quoted delivery times of late September and orders placed now won't ship until November, while the Black iPhone 7 Plus lists shipping estimates of two to three weeks. 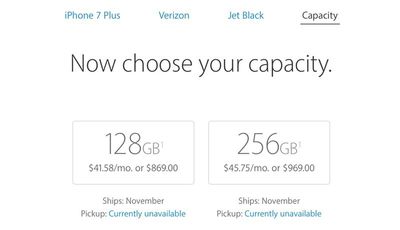 Shipping estimates in Apple's online stores for other countries such as the UK, Australia, and France are also starting to dwindle, with many Jet Black models also listed as shipping in two to three weeks.

Though pre-order supplies of some models of the iPhone 7 and the iPhone 7 Plus are beginning to sell out, it may still be possible to get an iPhone on launch day by visiting an Apple retail location on Friday, September 16.

Yesterday morning, Apple warned that iPhone 7 and 7 Plus supplies could be constrained in an announcement stating pre-order sales statistics would not be shared. According to Apple, early iPhone 7 sales will be dictated by supply, not demand.

Dammit Cubs
This is so stupid - i don't understand what the logic is of buying a one-time FULL PAYMENT PHONE requires eligibility process.

dumastudetto
But I thought nobody wanted the one without the headphone jack and such a minor improvement over last year's specs????????? I don't understand all the orders.
Score: 41 Votes (Like | Disagree)

That or no inventory to start with...
Score: 29 Votes (Like | Disagree)

levitynyc
Still can't get an order in with AT&T. I can forgive them though since its their first iPhone launch.....
Score: 21 Votes (Like | Disagree)
Read All Comments